... since I posted anything on my Blog. Apologies, I've been busy! New job, with several new assignments, changed modern cars several times and now working away from home, no time for Triumphs, a great big hole in my leg and some general loss of mojo seem to be the general issues.

So, where are things at the moment? Well firstly the modern 'fleet' - we needed a load lugger to get our youngest back and forth to Uni at Nottingham so we sold the Saab convertible (to Shedtune) and bought a Saab 93 Sport Wagon - an estate to us Brits. Great car, very capable, didn't love it so sold it on as soon as I could and bought another Saab Convertible! 'As soon as I could' was when I was able to change Poppy's classic Mini for a more motorway friendly MINI - I was amazed at how much the classic Mini had risen in value, I almost doubled my money on that car but it was a good 'um.
So I then needed another car to drive to an from a new assignment I have in the West Country, enter a bargain local Saab 95 Aero - 250 bhp of auto comfort, it had everything including seat coolers! It was a bit thirsty or was that my heavy foot, so I decided to change it for a more modern and lighter Saab 93 (I'm guessing you're seeing the trend here). I found one that needed a little love but it was cheap and by the time I negotiated it was even cheaper - and it had the factory supported Hirsch tuning kit on it too (not that the factory is interested anymore!). I spent some time and effort cleaning and mucking out, fifty quid with a dent removal chap (a magician) and some polish and it looks pretty decent. Same power at the old 95 but manual and lighter. The 95 needed selling but then I had a brain wave, I'd 'trade' it for a new clutch and 4 brand new wheels and tyres for the 93 (which had a sticky release bearing that meant it you could induce clutch slip at high speed but not on hill starts - it was weird!) the 18" Hirsch wheels were kerbed and made the car ride very harshly so I wanted to some 17's and my local Saab expert had new ones in boxes - a deal was done and the car looks and drives so much better now, 5000 miles on and I'm glad I made the change.

I think that about catches everyone up on the moderns.

What about the Triumphs? Well there is only one these days, the yellow TR6 which hasn't really seen much action lately. Carl Shakespeare and I went over to France in it a couple of years ago and the overdrive started to fail in a big way on the last day. We limped it home but it really was touch and go - I'm still amazed we got home under our own power. I then stripped it out and it was FUBAR, Carl suggested I get Graham Stretch on the Isle of Wight rebuilt it for me - I've met Graham many times over the last decade or so as he used to organise the IoW Triumph Weekend. Anyway, carrying an overdrive as foot passenger was interesting - we did a couple of trips over to the island for other purposes and managed to avoid conventional couriers.
I put the whole thing back together over the winter and ran around in it but something wasn't quite right, overdrive seemed to stay in. Like an idiot I didn't actually talk to Graham about it (had I don't so he would have set me straight) I sort of lost my mojo with the car and apart from a local car show and a couple of trips locally I just didn't do much with it. I was convinced that I had messed up the inhibitor switches and / or electrics and would need to strip out the interior and H frame to fix it. Frankly, I hate those H frames, never can get them in and out without sweating and swearing for a few days.

So the car languished whilst I took on a project that sees me working away all week, living in a hotel and returning home for the weekend and all that 'household admin' that entails.

Recently a couple of people have been having some work done on their cars by James Cooper who many of you will know from a tasty fast orange Spitfire ate auto tests, a blue Mk1 PI Saloon and a white Spit that's currently on motorbike carbs. Well being 'time poor' I thought I'd see if I could get James to have a crack at the TR and reinstall my mojo. He's had the car at his place and done a general refreshing including amongst other service items, beefing up the suspension with some new front Konis and a change of rear shocks. The car needed a little love for the MOT but nothing major. The revelation was the overdrive, James checked it over and could find nothing amiss - the solenoid wasn't the best but it wasn't the source of the issue, he tested my suspect electrikery and pronounced it OK - he then did what I should have done and phoned Graham who was very helpful. In a nutshell the overdrive needed a little bit of tough love to get it 'run in' and so James gave it the Italian tune up (working the overdrive in and out at high engine speed) and things seem to be much better.

The only real issue was that the car had failed to start for James when the MOT was booked and he suspected the fuel pump but didn't have a spare. Now I have 'many' spares so I threw some in the Saab and went over. We traced the fault to a crappy 'scotch lock' wire joiner tucked away behind the passenger side kick panel - now I hate those things with a passion and strip them out every time I see them. How this one evaded my OCD hatred I don't know, suffice to say, it's not there now.

The car now has a fresh MOT, working overdrive and is ready for the next adventure. Once I'm happy it's all sorted and have driven it around a bit I will sell it on this summer and pursue another 'project' that I've had my eye on for a few years - if I can overcome the logistics. 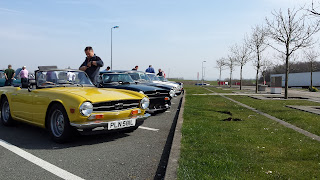