Worried about your trunnions? Relief is to hand!

This is an bit of an infomercial for my mate Dave and his company Canley Classics.
I know Dave well, I get most of my Triumph stuff from him.
I sometimes work on the Canley Classics stand at shows, I own a Canley Classics T shirt and I have spent many hours driving Triumphs with him.
Other Triumph parts suppliers are available, your mileage may vary and this may contain nuts.
If you don't like what I say, ignore it :-)
-
It's a well know fact that the small chassis Triumphs have some design frailties. One of the more spectacular failures you can suffer stems from the front trunnions. When you get a failure here you can loose a front wheel - this isn't a good thing. Often incorrectly known as "trunnion failure" what actually happens is that the vertical link that sits in the trunnion snaps - it does this for a number of reasons, lack of maintenance, fatigue, corrosion, previous trauma, bad luck.

Most often it's the nearside that goes, it's the side that takes all the hammering as you drive over drains in the road in the gutter. It happens when you put a lot of strain on the vertical link whilst maneuvering, say parking the car or turning sharply, or hitting a big pot hole. I've heard of it happening on a slip road or exit from a roundabout, it doesn't usually happen on a straight road and mercifully not usually at speed. However, these two failures below show you what can happen. 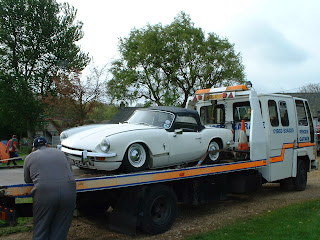 The one above happened on the Isle of Wight in 2003, I rescued the driver and his wife from the roadside and I took this picture. The damage to this lovely Mk3 Spit was minor but it was only luck and driver skill that saved them from the oncoming traffic. It happened on a narrow straight road, there wasn't an obvious reason for the failure. The car was repatriated and then repaired in an afternoon. It had not been neglected or abused. The chassis damage was minor, the damage to the bonnet annoying but the owner could and does live with it. 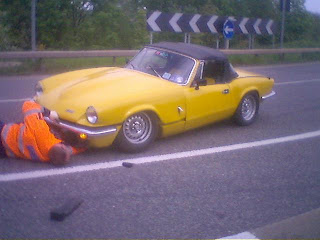 The one above happened earlier this year, on the M1 roundabout slip, smooth road and not a high speed. Again minimal damage and repaired quickly. You can read about it at Jony5's blog.

So how/why does it happen? I hear you ask (yes I am that powerful, but I only use my powers for good)

It's actually the vertical link that's "at fault" here - it screws into a brass trunnion which has a rubber collar seal on it to keep water out. The vertical link is hollow - i.e. it has a drilling up the centre of the thread so you can pump EP90 gear oil down it via a grease nipple screwed into another drilling in the vertical link - in theory this oil injection expels water and dirt as well as lubricating the trunnion. Each side is handed so there's a left and right thread - as you turn the steering it winds up and down the thread. Neither trunnion nor vertical link can be swapped from side to side.

There's debate over whether you should use grease or not, I won't get into that but the manual says gear oil and that's what I've always used. Trouble is, if you neglect them or the previous owners have neglected them, then you may have a latent problem. Water sits in that collar seal right at the base of the thread and can corrode the vertical link at it's narrowest point. The pits from the corrosion create a point for stress cracking often called a "stress riser".

When these Triumph designed front vertical links or front uprights as they are sometimes called, were used in single seater racers of the 50s, they used undrilled vertical links. Race car builders considered them stronger. The drilling takes out only a small amount of metal but it is a weakening factor, it's kind of ironic that the oilway is there for maintenance yet introduces a weakness.

So how can you stop it happening? Maintenance and frequent inspection/ replacement of the vertical link. The trunnion itself isn't really an issue, they are softer (brass) than the vertical links and wear quicker. Usually the vertical link wears with them, but not to the same extent. Examine the threads of the vertical link and especially the collar area at the base of the threaded part - clean the oil, grease, crap off and have a real close look. Corrosion pits act as a stress riser so if you've got a rusty one be aware that it's a weakness and consider replacement. They are handed so you need the correct side.

Personally I am always careful with vertical links of unknown heritage. The six cylinder cars have more weight up front and a slightly different design vertical link but the problem remains - of the two examples above, the white Mk3 is a 4 cylinder, the yellow Mk4 is a 6 cylinder PI car.

Now there is another way :-)

For a long time now the Triumph front suspension has found it's way onto all sorts of kit and sports cars. Look under a 3 litre Marcos and you'll find Vitesse front suspension. The trunnion/vertical link set-up has actually evolved quite a bit in some applications and one of those evolutions is used on Caterham cars. However it's never been a direct bolt on to a stock Triumph owing to the evolution. Now Canley Classics has commissioned two new sets of suspension to completely replace the trunnion and remove the weakness in the old Triumph design.

Fitting is pretty straight forward - the retail kit is supplied assembled as a vertical link, spherical bearing and lower bearing carrier. I renewed the top ball joints too and that made fitting easier but you don't have to do it that way.

Now you can reassemble with this 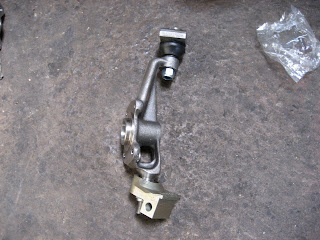 What's shown is what you get in the kit PLUS a balljoint. Click on any picture to make it full size.


What does it cost? The six cylinder kit is Canley's Part number CATKIT1, retail price (inc VAT) is £235. That's for everything bolted together, both sides i.e. the carrier, bearing, circlip, lower nut and the vertical link.

Top ball joints are about a tenner each

The system can be ordered on the phone only at the moment, Dave's yet to update the web pages so give Claire, Phil or James a call at Canley Classics (don't bother Dave, he's too busy developing more new stuff!).

Dave will fit it for you, contact him direct for a price and availability in the workshop.

The parts will not be sold separately, spares will be available to people who bought the full kit.

There is limited availability for the 6 cylinder stuff at the moment. That will improve when the next shipment of vertical links comes in from Elbonia but they will need machining, etc.

You can't use your old vertical links and you can't mix and match the new stuff with a trunnion or anything silly like that!

If you were daft, you could run a trunnion set-up on one side and this new one on t'other - Canley's did whilst testing it for a year. 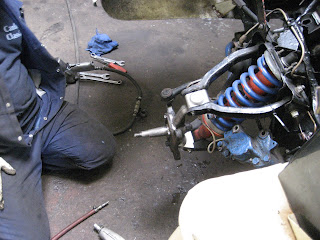 What does it drive like?
It's pretty much unnoticeable - I've just done 1300 hard miles on them in a weekend and the car just feels normal. They are unremarkable, as they should be. 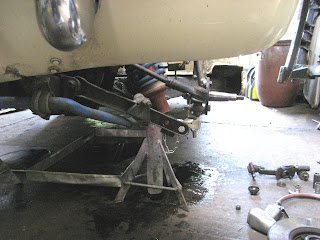 Worth the money?
Well you decide, I'm just reporting the facts. Having seen the aftermath of failure I am happier to have them than not. Replacing like for like a pair of standard vertical links, trunnions and trunnion bushes with nuts and bolts etc is about £35 cheaper so the extra piece of mind is well worth it to me.

Thanks Jim, nevermind about the recent rebuild, you'll be fine with new V links and trunnions - you know their condition and any deterioration is down to your own maintenance and abuse :-)

It's always tricky telling people what's just around the corner in development as it invariably produces loads of enquiries for stuff that can't be supplied because Dave's too busy dealing with enquiries to test the stuff and get it to market!

It's the same with the rear CV joint conversion that's in testing at the moment and the alloy 6 pot cylinder heads that are being cast "soon" - it's all coming but then so is Christmas :-)

MC - I'm sorry I don't know enough about Reliants to tell you for sure. What I do know is that it fits the Triumph Spitfire and Vitesse/GT6 type suspension. Try a call to Dave Pearson next week and explain your set-up so he can identify whether it's GT6 or Spit - they are different.