You can't keep them all, or so Mrs C keeps telling me. 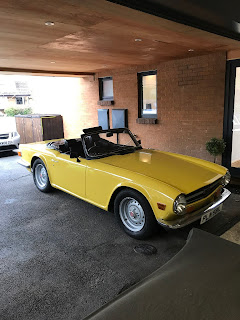 It's a 1970 UK car, with overdrive. Its all up and running well. I've had it for 7 years and its completed a few events and trips, in it over the years including a Round Britain Reliability Run, well I am on the Club Triumph organising team so it seemed necessary to do 2000 miles non stop in the TR. It's been used well and I've taken it to France and various trips with friends around the UK, it's never been home on a flatbed.

When I acquired the car, back in 2012, it had been off the road for many years in dry store. I drove it home from Essex to Berkshire and apart from a little last minute high temperature when I came off the motorway, it was fine. The rise in temp was due to a poor connection to the electric fan. That's all been replaced now with a modern controller and in 2018 a new radiator. Shown below when fitted 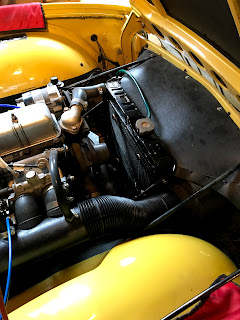 Over the years I have replaced the inlets and linkages with refurbished ones from Neil Ferguson, along with a set of injectors and a metering unit just last year. I generally source my refurbished stuff from Neil as he's ex-Lucas and a helpful chap with decent prices. My next project car is Lucas injected too :-) Teaser image below! 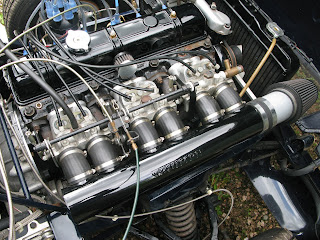 Back to the TR6 - I've renewed most of the interior with standard vinyl, black carpets and new sound insulation. I rebuilt the seats underneath with new foam and webbing but using the original covers. I've added some hidden USB for phone charging and sat nav too.

The suspension was a bit of a voyage of discovery, when I first had the car it was prone to wallow and not very comfortable over our bumpy A roads. I replaced springs and shocks for the RBRR but I went a little too low. The car came with a twin tail pipe exhaust system and that hung below the diff so we grounded out far too much. I replaced the exhaust system, including a tubular manifold, with a single pipe system - it's not too loud but gives a nice note. Over successive trips I tuned the suspension ride height with different thickness spring insulation pads. Ultimately I settled on Koni shocks on the front and uprated lever arms on the back, there are thicker pads top and bottom on the springs. That's the set up that's still on the car today and it's a good all round set-up, pliant and not too hard so it stays comfortable at speed and round town.

There have been a few other improvements over the years, the RBRR suggested new halogen lamps and headlight units to improve the night driving experience.

When the clutch release bearing was getting noisy, I renewed the complete clutch, I consciously went for the TR4 arrangement without the dowel, this is not as quiet as the TR6 arrangement but with a bronze carrier and no dowel it's far more long lasting - you don't get the wear notch that ruins the carrier.

A trip to France in 2017 showed up a failing overdrive, it didn't let us down completely but it was close, I pulled it out and had it rebuilt. That took a little running in but it's good now. A fine crack in the original radiator lead to weird water loss when stood but nothing when used so I put in a new radiator last year.

The hood is tight and the windows are clear, being tight it is a bit of a workout to fasten but it does mean that it's as waterproof as any Triumph I've owned. It's very good in even the worst weather. There's a tonneau cover that fits too. 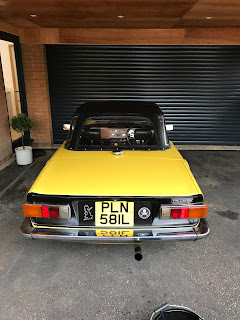 The car was restored many years ago, when replacement panels fitted, and its still very good today. It's no concours motor, it's pretty and very useable. There are some cosmetics around the car that could be improved and things to tinker with if you're minded to.

Why am I selling? Well, apart from not being able to keep them all, I have been pursuing a Vitesse for a few years now and just recently I managed to buy it - it needs investment and work and therefore I need to release funds and space.

The TR6 is tax free and MoT exempt, I have service history from my ownership but very little prior to that. I'm hopeless with dates and realise that the above reads like a story but the order is a little wrong so I'll need to refer to the bills for the detailed chronology if any one's really interested!

Free cup of tea with any viewing, free biscuit to the buyer!

Thanks for all the interest! In had to disappoint some viewers as the car sold yesterday and is now with its new owner.