I've been away on business in Manchester and I'm on my way back home. I usually call in and see Dave at Canley Classics, either collecting or delivering some piece of Triumph oily metal but always for a chat and to put the world to rights. So, picture the scene, I pull up at Dave's to see Karl and Dave putting a Triumph 2000 bonnet into the back of Dave's Herald Estate, nothing weird in that. However, the way they are handling this bonnet shows that it's not a standard item, it's far too light. It's matt black on the outside and white on the inside - the skin is riveted on - it's an aluminium Works bonnet! 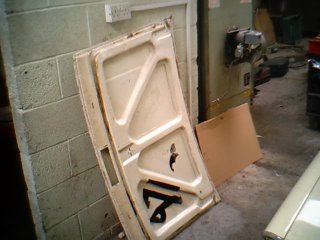 And that's not all, there's a smooth boot lid in the workshop and a door, I think.
I say "I think" because there are so many ex-works parts in Dave's place it's like a reincarnation of Abingdon in late '69 early '70! 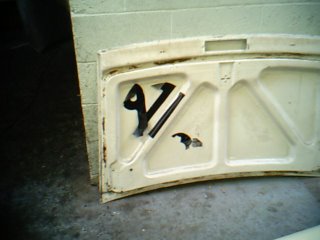 These parts are rarer than a rare thing elected Rare Thing of the show at the International Rare Things Convention. The provenance of these parts is interesting, I have to keep my council because there may be more! Put it like this, these parts were made on original tooling, they are definitely factory parts, no doubt about it. If you look closely you might see the rivets holding them together. I only had my phone camera on me so I couldn't take many photos and the quality is pretty crap but you et the idea :-)
So where are they from? They have been on a car but don't show any signs of what car. There's some race numbers stuck inside but they don't give many clues, there's some tuning data written on the inside of the bonnet but again, no real clues apart from this was a competition car. But which one? Well I can account for all the works shells but one, you work it out - my theory? 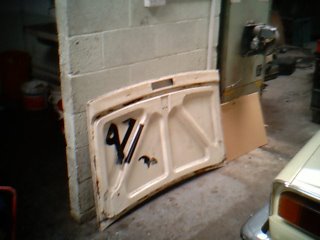 Could this be the infamous XJB305H, Brian Culcheth's World Cup car that became the Team Castrol car and was ultimately given to British Motor Heritage who apparently decided it was too far gone to restore. BMH ordered it crushed and so, the story goes, it was broken up. Brian Culcheth told me it was broken up, several others have said likewise. However, I've always refused to believe that, maybe it's just a foolish romantic notion that it survived in a lock-up somewhere within range of Swindon (from whence it was reportedly disposed of). Anyway, these parts could be spares from the works, could be the broken up remains of "305" they are certainly unlikely to be anything other than works parts from works cars!
Anyway, Dave is on the case and if there's more to be had, he'll try and have them and I'll do what I can to help ;-)
Posted by Jason at 1:24 pm