Ever since we got the Sixfire I've been unhappy with the handling and the "attitiude" of the car - it sits far too high at the back and is too soft at the front. As it's Claudia's daily driver I haven't been that fussed about it and she has never really ben intereste din handling. However over the winter she experienced it's evil handling in the wet and came home telling me to get it sorted out!
So I got myself a Canley Classics lowring block and thought I'd drop the rear 3/4 of an inch. Now what to do about the front?
I had some 330 Lbs springs from the abandoned Vitesse project so I though I could use those but as it happens I acquired another set of springs with some old Konis. On close inspection they looked OK. They are a bit scabby and I thought I could paint them but then I thought, what the hell let's just clean them up and fit them.
I also wanted to replace a slightly dubious track rod end so I picked up a pair a week ago when passing Canleys.
So today I fitted the rear spring lowering block - bit of a fiddle but not to bad. As that went so well I had a go at the fronts - cleaned up the old Konis, blasted and painted the top platforms and reassembled them with the blue springs that came with them. I had a bit of hassle getting the old ones off but did it in the end - just needed the right curse :-)
Track rod ends were straight forward and with careful positioning I think I've preserved the tracking settings - we'll see when I test drive it tomorrow.
I took some photos to show the ride height before the work, once I've driven it and it's settlend down a bit I'll take some more to compare and post it all up here. I hope it's done the trick! 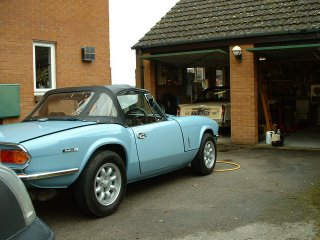 So this is the "attitude" of the car before I lowered the rear spring and changed the front springs and dampers. Pretty arse in the air isn't it - not good for handling. The front was prone to porpoising after hitting a bump, especially at speed. 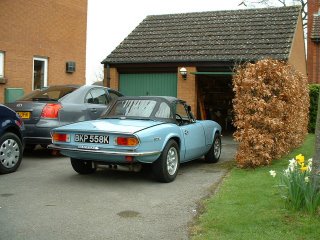 And this is the "attitude" of the car after lowering the rear spring and changing the front springs and dampers. A small improvement visually but a big one on the road, the porpoising front is seriously improved as is the dip on braking. The rear feels more stable and roundabouts aren't quite so roulette like - will she won't she get round there without doing something weird!

Just about to do exactly the same to our Spitfire 2500 which is also sitting high at the back. Fitted 330lb slightly lowered springs at the front when she was re-build so the front is OK -- but after nearly 8000 miles the back hasn't settled at all so I ordered a 3/4" diff spacer from Canley yesterday.

The arse-up attitude certainly makes the handling interesting :-O Three instances of snap oversteer in the wet so far -- no problems at all when it's dry!!