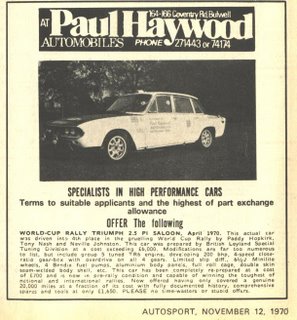 Well there I was just browsing through a couple of old car mags I'd bought on eBay. I was a little disappointed in the one I had in my hand, it didn't have the information in I was looking for so I flicked to the classifieds, you often see interesting things back there and true enough, there it was, somthing indeed very interesting - an advert for XJB392H. If you click on the picture it should open up to a full size image for you, in case you can't read it it says

"World-Cup Rally Triumph 2.5 PI Saloon, April 1970. This actual car was driven into 4th place in teh gruelling World Cup Rally by Paddy Hopkirk, Tony Nash and Nevilel Johnston. This car was prepared by British Leyland Special Tuning Division at a cost exceeding £6,000. Modifications are far too numerous to list, but include group 5 tuned TR6 engine, developing 200 bhp, 4 speed close ratio gear-box with overdrive on all 4 gears. Limited slip diff. 6 1/2 J Minilite wheels, 4 Bendix fuel pumps, aluminium body panels, full roll cage, double skin seam-welded body shell, etc. This car has been completely re-prepared at a cost of £700 and is now in pe-rally condition and capable of winning the toughest of national and international rallies. Now offered having only covered a genuine 20,000 miles at a fraction of it's cost with fully documented history, comprehensive spares and tools, at only £1650. PLEASE no time-wasters or stupid offers."

Interestingly the car looks like it's been completely repaired - it was quite bashed about the front end on teh World Cup Rally. "having only covered a genuine 20,000 miles" - I love it, the World Cup was an 18,000 mile rally - so what they were saying is that it's had the wheel driven off it for all of it's life! The garage was in Coventry Road Bulwell, which I think is Nottingham - I've never of them before.

I know where the car now rests and I know there's a few people trying to wrestle it from its current owner - I think he wants more than £1650 for it now though!