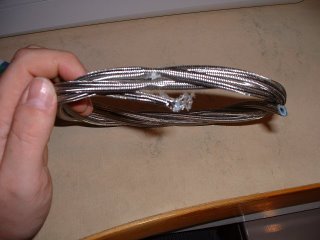 I bought some braided hose and fittings to remake the clutch master to slave pipe - I've never liked it in solid pipe and having seen a few in flexi pipe I though - "I'll have some of that". So I satrted shopping around a bit and got totally confused with pipe sizse (thanks to Dave Powel for the tutorial, much appreciated). Anyway, I found what I needed at www.rallydesign.co.uk and put in an order - I was impressed with their prices but not their postage costs which I thought where expensive - but hey! You pays yer money you takes yer choice.
So the package arrived and a neighbour signs for it - she brings it over that afternoon and I unpack - bummer, the pipe is damaged, looks like someone has dropped something on it and crushed it - as it was coiled up it's put a nice pinch in the pipe every 8 inches or so. 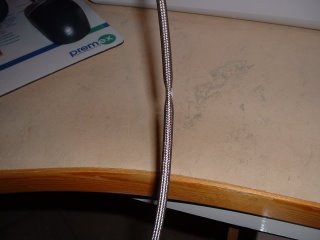 No good - so I emailed them and got an auto reply saying emails might not be responded to immediately - so I called them. Explained the situation to a chap there who said they couldn't do anything with the courier as the package had been signed for as OK. Grrrr - that expensive delivery option wasn't worth squat. However, he said he appreciated it was no fault of mine and he'd get a new length of pipe out ASAP for me, the next day it arrived (60p's worth of Royal Snail - better than the £8.50 Citylink!) and all is well with the world again.
Now I can do my clutch pipe expertiments - if this works I'll sort out the other pipes I don't like the look of :-) I also bought an eBay special pipe flaring tool, then discovered I have a complete brake pipe set in the garage!

Initial Shittylink are the bain of my life!
I have had to send back about 5-6 items which have arrived broken! and What is the point in delivering between 9 and 5, when 90% of the population are at work!!!
Grr!


Out of interest what are the specs for the clutch line?

Inital Shitty-link are the bain of my life!
I must have sent 5 or 6 items back damaged and why deliver between 9-5 when 90% of the population are at work?
Grr!!

Out of interest what are the specs for the clutch line?

I'm using -3 tube and a couple of banjo bolts banjo with some copper washers - should look neat.