First drive with a new heart and a look back 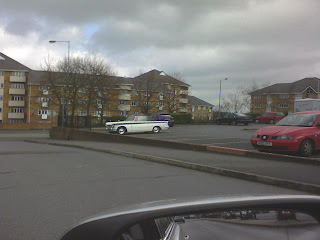 For the first time in ages I've seen another Triumph in Reading and it was a Vitesse complete with hardtop like mine :-) I didn't have much time to get the phone and take a picture as I drove by with traffic behind me I couldn't really stop. I was at this point in the Toyota.
The test drive however was far more fun, it was only a short test run, just to make sure everything was working. It was really good to get out in the Vitesse again, I could only run up and down my local private road due to the fact that the MOT expired whilst the car was in pieces although I was able to tax it (free of course) before the original MOT expired.
So what have I done over the past 5 months? It's probably easier to say that the the engine block, cylinder head casting and gearbox casing have been retained but everything else renewed :-)

The cars currently back on points and I'll put the Aldon Ignitor system back on. The Magnecor leads and Iridium spark plugs (thanks Bill) should help.
I'm running it in on Penrite running in oil, that'll do for 500 miles then I'll change that and put some cheapo dinosaur juice and a new filter in for maybe a 1000 miles or more. Then I fancy going fully synthetic.
As for gearbox oil, I've thrown in some cheapo EP90 just to get mobile but my mate in the States is sending me over some Red Line MT90 (thanks Jerry). Its a fully synthetic oil and said to be very good, basically I took a few bits of advice and was compelled by this article on the Austin Healey transmission
The injection seems to be OK, just need to synchronise the butterflies as they aren't all closed at idle (you should be able to stall the engine by putting your thumb over the air bleed, my engine won't do that now). My fuel tank modifications are a little supect as the boot smells of petrol and I suspect a leaky tank so I may do what I always wanted to and get a bespoke or TR6 tank. There's lots of chat about fitting swirl pots and helper pumps but I'd like to stay with a single pump. I would also like to get the plumbing tidy so I can use the boot properly - the car does occassionally have to carry some luggage.
I'd really like to do some more reading on how to make the most of the PI system and improve my knowledge. I've amassed quite a lot of technical stuff now. Seems that two PRVs and an engine drive pump are high on the list of modifications.
The next thing to break will be the diff, it's not the quietest of diffs and leaks a bit so I'm thinking in the summer I'll swap it out for my rebuilt spare - one I bought from Kipping about 20 years ago, it's never seen the road! Must check the ratio.
In the meantime it's refit the gearbox tunnel, carpet and passenger seat - an hours work tops. Then get that MOT and drive - running it could be a trip up to Canleys on the A roads one day.

The car still wears one of it's RBRR stickers and whilst it's somewhat inappropriate as it didn't actually start the run, I'm going to leave it on.

I was so impressed that I washed the old Monster, it was looking a bit sad covered in garage dust and oily fingerprints. Whilst it was outside I also painted the garage floor as I was fed up with the dust from the concrete - I need to finish this job properly. 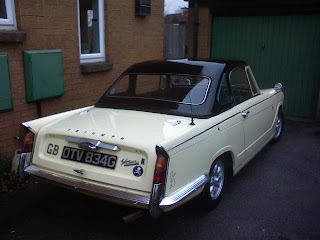 I really enjoy your blog, keep up the good work.

Gear Oil, as you know we can only use GL-4 spec in our cars:

Note that there is also a Redline 75W/90 Differential Oil, also GL-4.

Now they have reduced to amount of ZDDP, (Zinc, Phosphour etc) additive package in almost all oil, which is very very bad for our flat tappet (cam follower) engines, (it will show API SM on the back of the bottle), we must also find an alternative.

Hope this helps keep our engines together!

Thanks for the kind words Leon. I'll see if I can find those oils in the UK - in Reading we are not very well served for motorists shops and mail order seems to be the only option - gets expensive with stuff like oil. Other than that maybe I can get some sent over from the States - the gear oil is labelled as a gift of maple syrup :-) I think my parents are going over soon - must remember to be nice to them!

Hi Jason,
Glad my article on Austin Healey gearbox/ overdrive oil helped you!
Regarding this whole ZDDP issue - talk to the UK distributor of Penrite Oils. I have used Pentrite HPR40 in my Healey 3000 http://www.myaustinhealey.com and it is great. Penrite now provide a chart on the amount of ZDDP in their oils which should help http://www.penriteoil.com.au/tech_pdfs/149%20LATEST%20ZINC%20LEVELS.pdf
No interest in any oil company (Redline or Penrite) - just trying to help out a fellow British Car enthusiast (or is that Masochist?)
Best
Chris