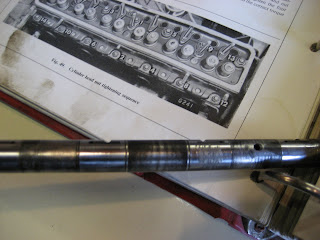 I'm kicking myself that I never stripped and assessed my stock of rockers before now. Yup, you guessed it, what I have is shagged. This was on the car when I got it - a Mk1 set - I think from a 2000 as they have the short adjusters. The shaft had the unsupported ends with end caps and mills pins (not really sure of those, if they drop out they will do some serious damage in an engine).
The rockers have two oil holes, one directly on the top and the other in the familiar position just next to the adjuster. Having stripped it down it's not going back on. The shaft is scored badly and the surface is breaking up in parts. This was the best photo but not the worst wear point. I've seen worse but it is quite bad. It's clean and clear inside though - you can see through it and the oil holes are all unblocked. The rockers are OK, some are a bit worn but nothing awful.
I had a spare set of Mk2 gear from my spare 2.5 engine, some of the rockers aren't great but I had a few stray spares so I mad up a set. The thing is the rockers have only one oil hole next to adjuster - I didn't know there were more than one type - the twin oil hole ones seem lighter and thinner than the Mk2 ones.
Now for the trouble - the "spare" shaft is better but not great, it's also not an open tube like the other one - it's not blocked, it's hollow and still has the oil holes and little dishes in the shaft like the Mk1 shaft. So, I know Mk2 pedestals are the better ones as the end rockers are better supported BUT which rocker arms to use?
Also, if I use the 2 oil hole arms then I guess I need the matching totally hollow shaft to supply the right amount of oil. I don't think I should mix shafts.
Of course, both sets have been apart before, there seems no sense to the way they were put back together - springs washers and plain washers (and broken spring washers) and spacers all over the place! I've no reference to use to rebuild them (on a new shaft) so I've just figured out an order on the old Mk2 shaft.
All the pedestals look the same width (apart from the handed end caps only one of which has the oil hole) so where do the fat spacers go? Grrr - workshop manual shows no spacers at all but then I'm not 100% sure what I'm looking at! Any help with a photo or description would be appreciated, I'll get a new shaft ordered Monday.
As you can see below, I've got the injection back on and it's all timed up OK, wasn't as tricky as I thought it would be.