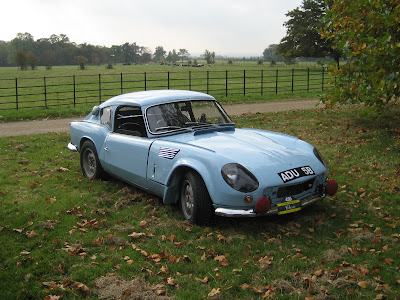 It's a long story and one that was full of ups and downs as we nearly didn't make it but it all come good in the end thanks to Dave Pearson's perseverance.

Basically works Triumph Driver Bill Bradley had a few cars "left over" at the end of the Triumph Competitions Department. Included was ADU 5B one of the rally Spitfires. 5B has been with Bill ever since, languishing in the back of a barn in partly dismantled state but largely complete.

Bill has been slowly piecing the car back together for the last few years getting help from his considerable and venerable network of ex-works guys. The car has been slowly taking shape for years culminating in the idea that it would be a good idea to commit to running the car in the Norwich Union classic on Sunday 14th October.

Now that meant a lot of shaking down of the car, it needed an MOT, along the way it needed quite a bit of tweaking and fettling to get an MOT, get it handling somewhere in the right ball park and getting the ex-works spare engine running. Peter Clark, ex-works mechanic had done a lot of the fitting up but dave was left with the hard work of making it all actually work.

It was a seriously touch and go thing.

On Saturday night Dave was pretty low, nothing had gone well and he had been at the car for 15 hours straight that day as well as most of the previous week. I was on my way up to Dave's and took some food and some encouragement that took him to a full 18 hour day!

Anyway, the car was there or thereabouts, stuff didn't fit 100%, stuff didn't work 100% - including the starter but what the hell! Let's do it we said and we did.

I won't say it was a walk in the park but it wasn't exactly a RBRR - we had some issues and we had some fun - an oil smoke filled cabin at 100 mph round the high speed bowl was interesting but we made it. Bill hadn't seen the car complete until the finish, he had been round in FHP993C with his wife and daughter - another car Dave has worked hard on - regular works mechanic ain't he!?! 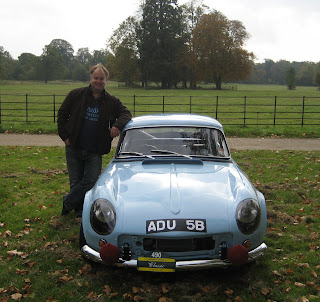