Blimey, it's been a long time since I did anything serious in the garage. Having found myself with some time on my hands - I'm currently looking for paid work again - I decided it was high time I sorted out the TR6 interior.
When I got the car it was the interior that let it down, a bit of a mix of old and repro trim, mostly past it's best, carpets stick directly to the floor and sagging seats.
I did the seats immediately and then gathered the parts to do the rest - new carpets, underlay, a trim kit, H frame cover, clips and fastenings, glue, etc, etc. So it seemed like a "cheap" job as I had all of the big cost items. It was just time - and now I have that.
So I stripped it all out and there it sat earlier this week, looking all empty and then I thought what a pig of a job it would be to have to take it all out again to fix the clutch!
You see I've always had a tricky clutch in the car, not awful but occasionally when warm it gets quite "off/on" the pedal goes "light" as you lift your foot off it then it suddenly engages and you jerk forward.
I found a rather crusty looking master and slave cylinder pair on the car and decided I would start with replacing the hydraulics - felt better but not right. I then thought it was the pedal spindle bush - well that was easier to get out with the interior stripped. On inspection it wasn't great so I replaced that but it wasn't bad enough to cause the issues.
Watching the clutch operation with the gearbox tunnel cover removed didn't show up anything unusual and so it was time to pull the box out.
What a heavy and awkward job but it's out and on the garage floor. Here are some photos of what I found and I'd be interested in any feedback (there's a thread running over on the CT forum http://club.triumph.org.uk/cgi-bin/forum10/Blah.pl?m-1396966649/ should get you there).

OK I'm going to put all these photos up here just in case anyone’s interested. You should be able to click on them and get a bigger version to zoom in on stuff - I hope.

First up, this is what greeted me when I pulled the box out, doesn't look so bad but I've yet to take the cover off and see what the plate is like, I might as well put a new clutch in there unless this one is excellent! 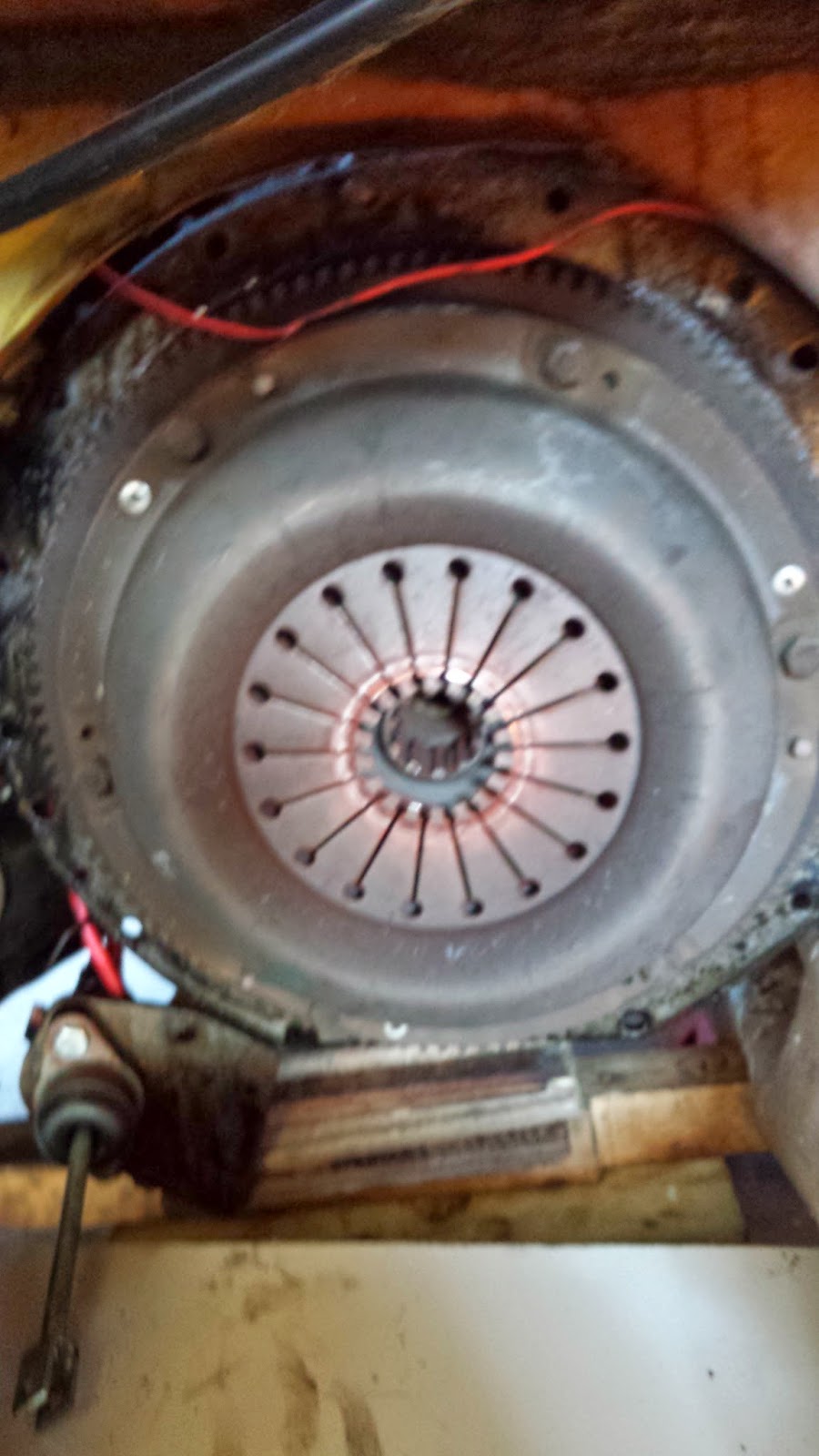 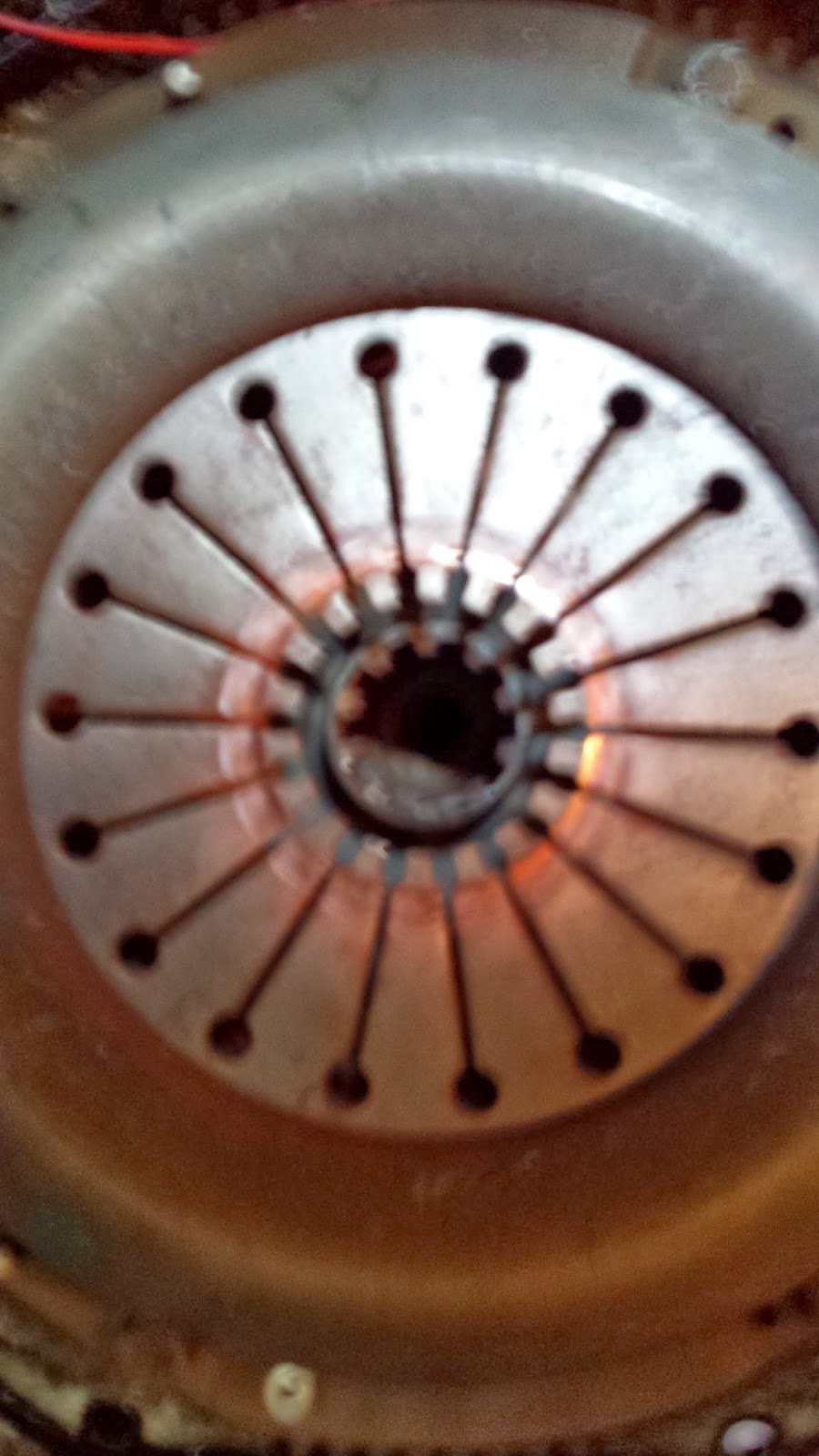 Here’s the notorious cross shaft and release fork assembly – looks OK to me. 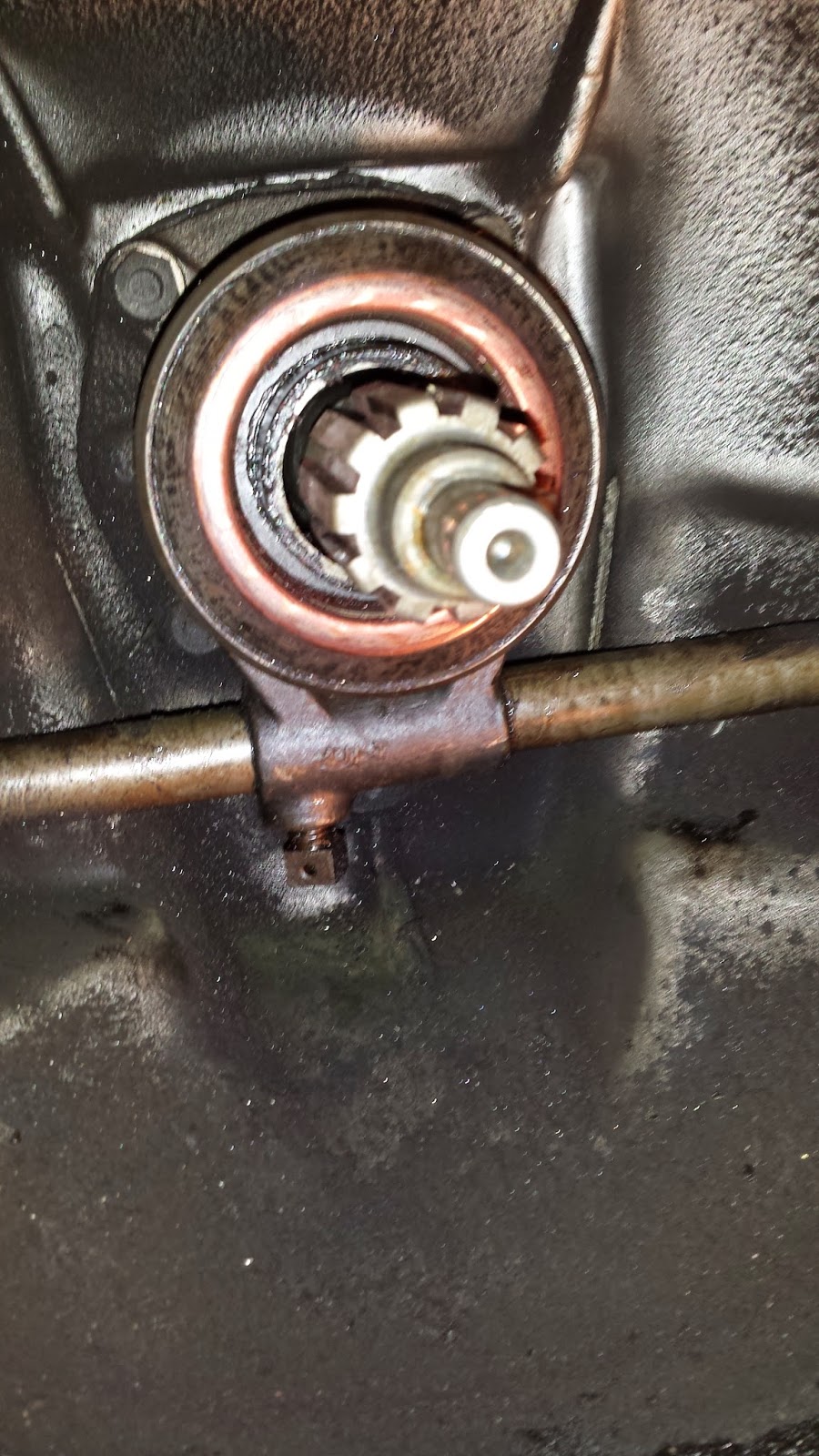 It’s a bit grimy in there but no bits of metal or broken parts greeted me so I’m saying this looks OK. 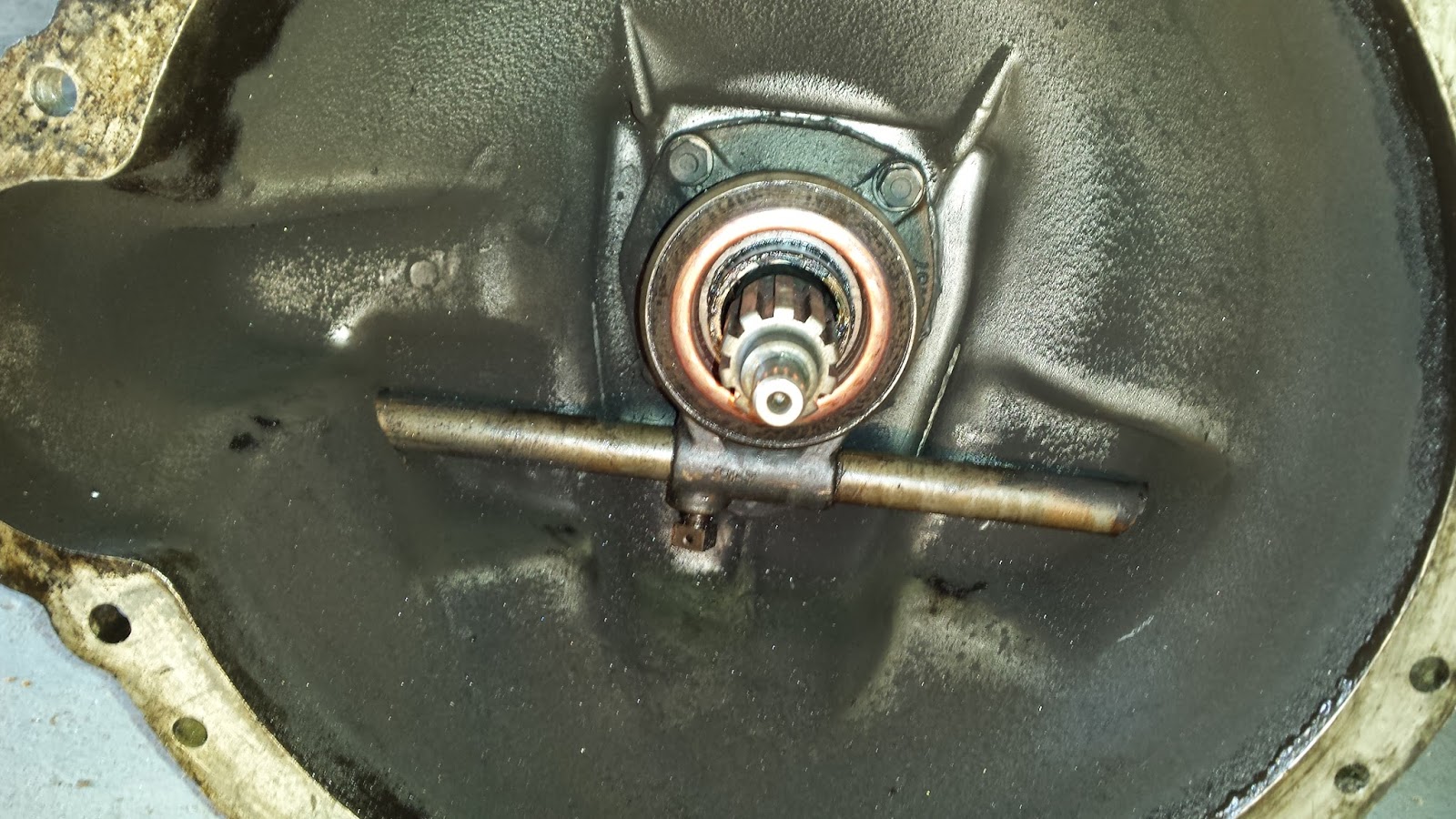 Could this be my problem? The cross shaft is very loose in the casing and I can feel a lot of play. The shaft itself looks OK so it’s the bushes in the gearbox casing – a cheap fix and I’ll take the advice to put a double width set in (or double up the standard ones). 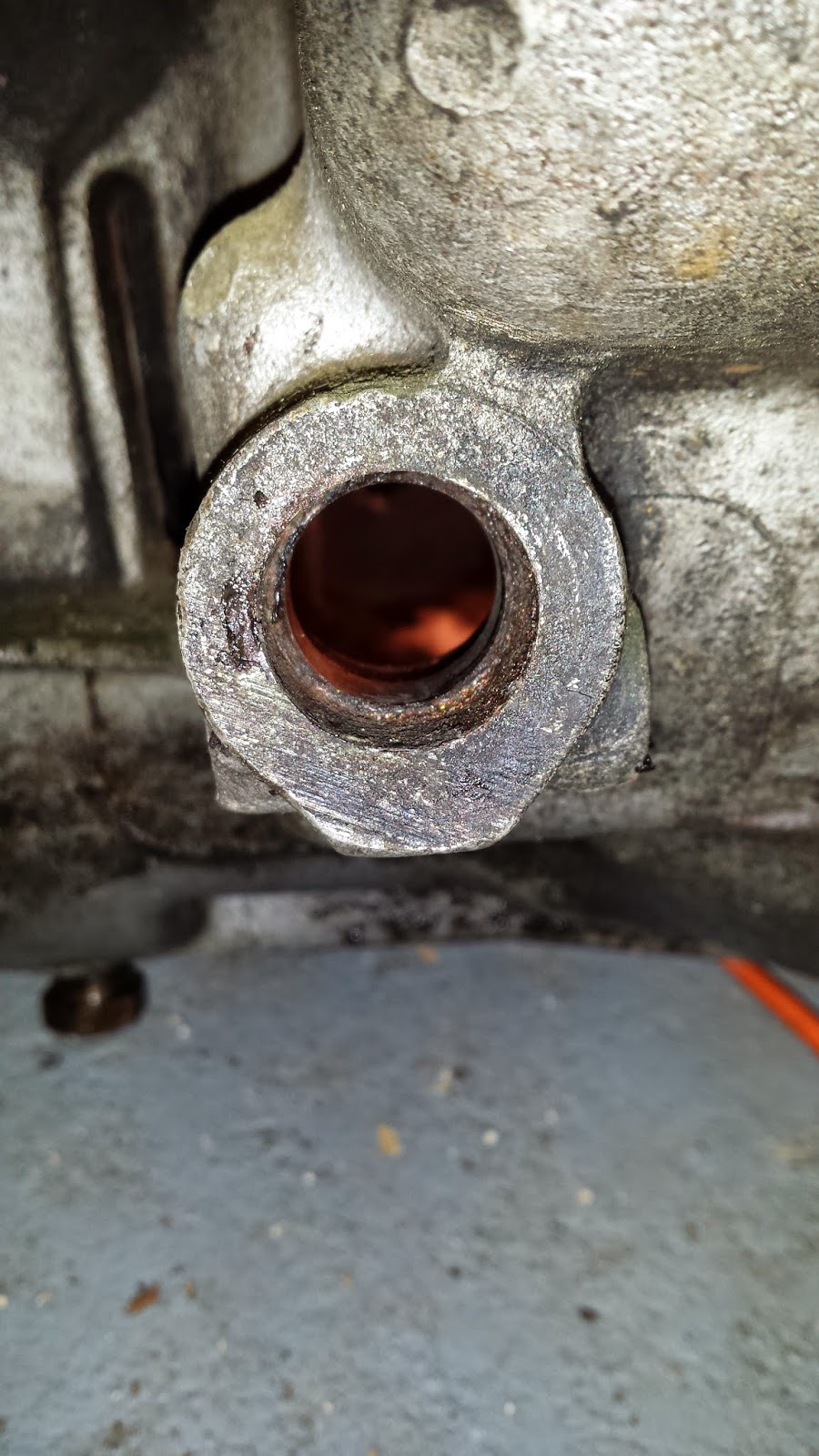 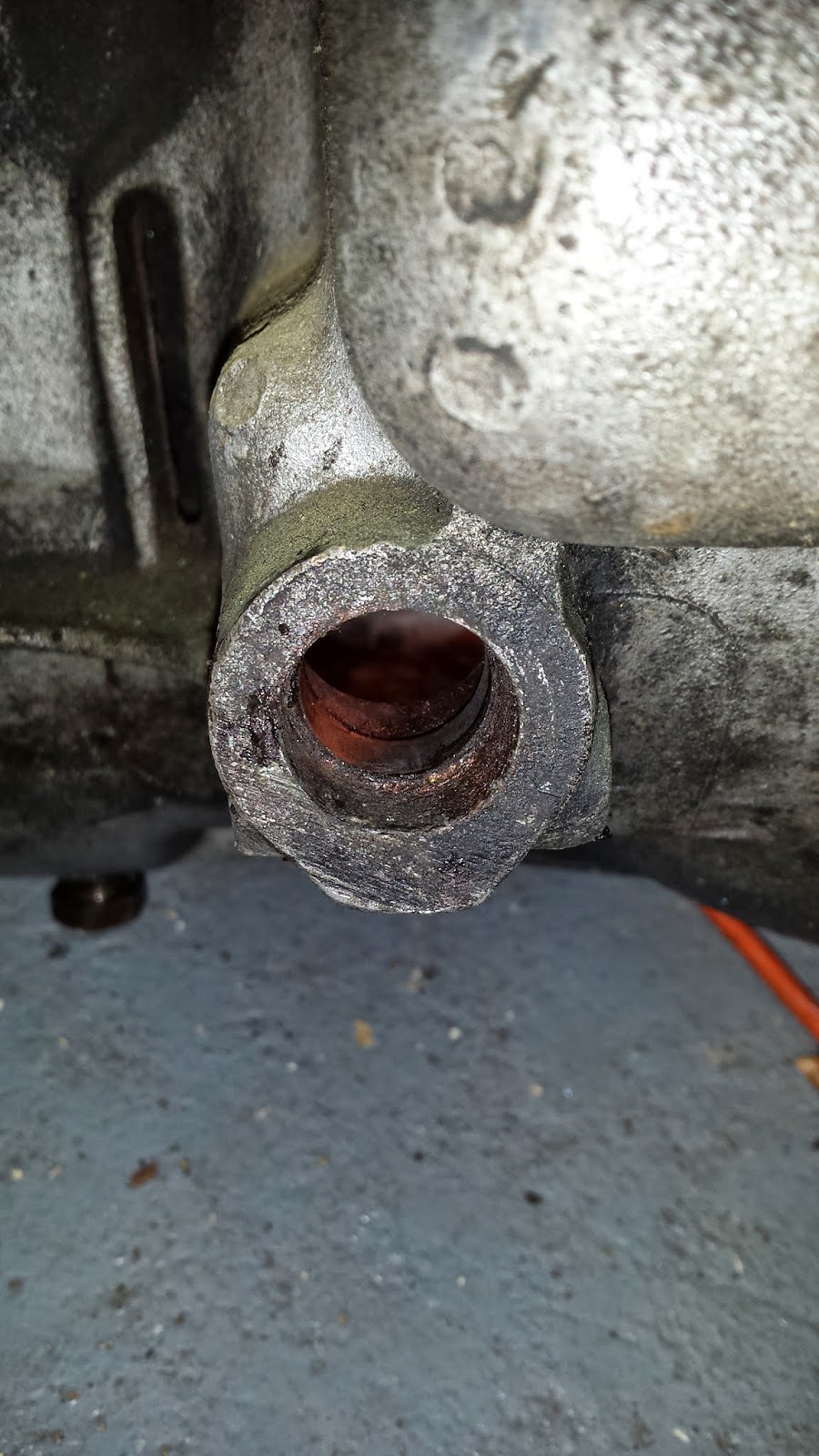 The release bearing and carrier – cast iron type.  It’s got some wear “dents” in it from the fork but no sharp edges or other obvious wear. Is this OK to reuse I wonder? 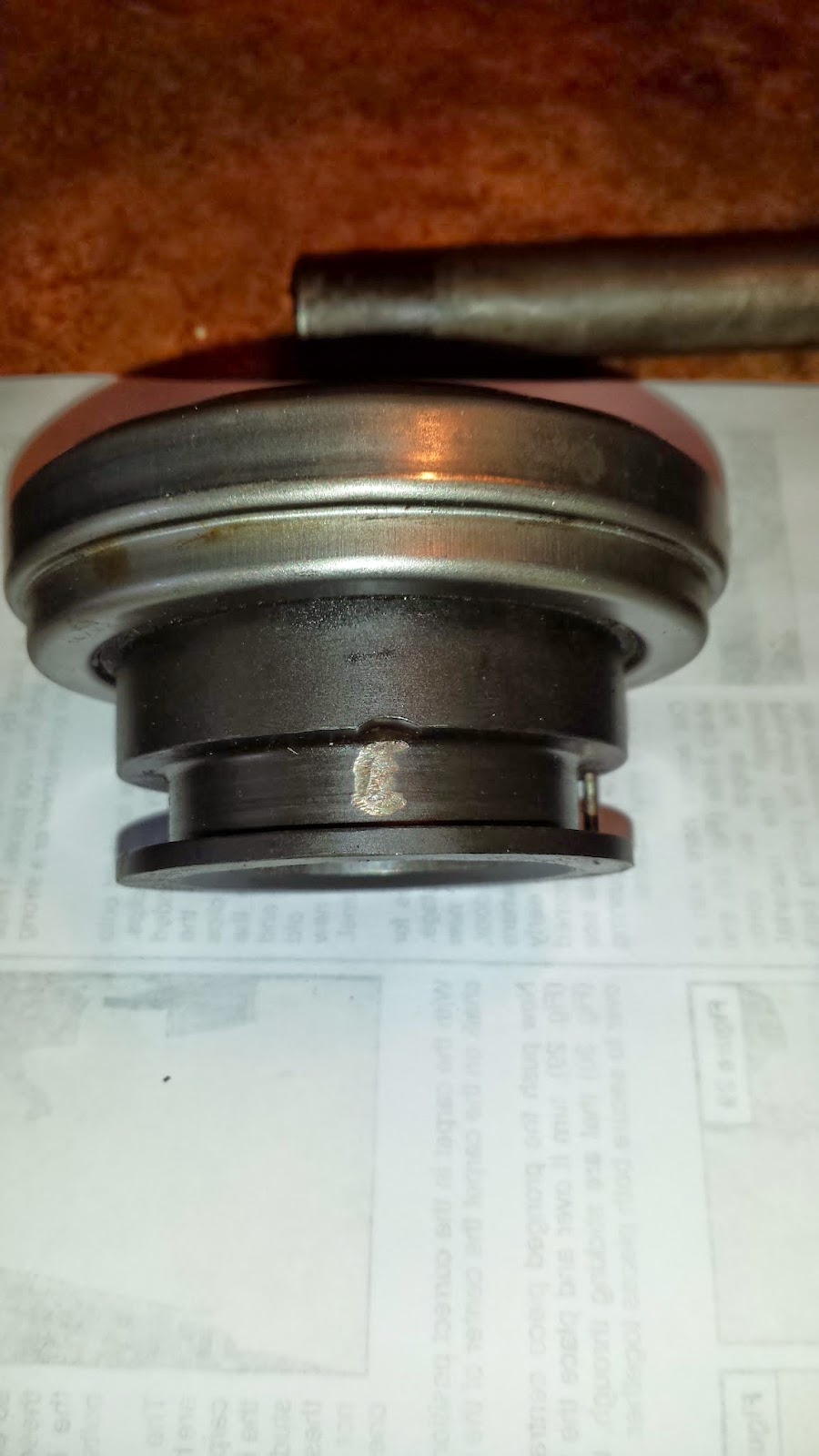 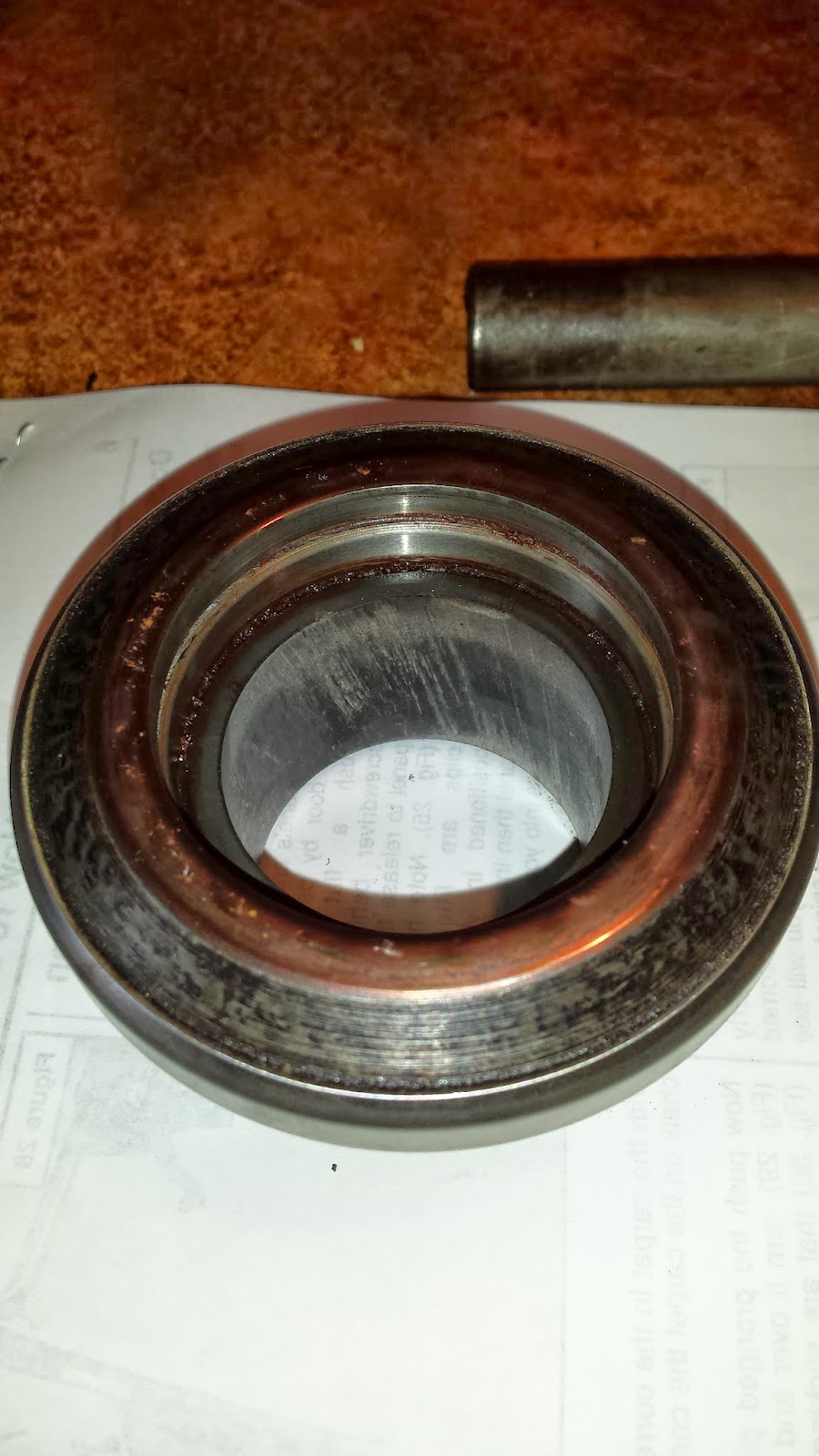 Fork and taper pin – looks good (I will get a new pin even though this one looks great, not worth the risk for a few quid). 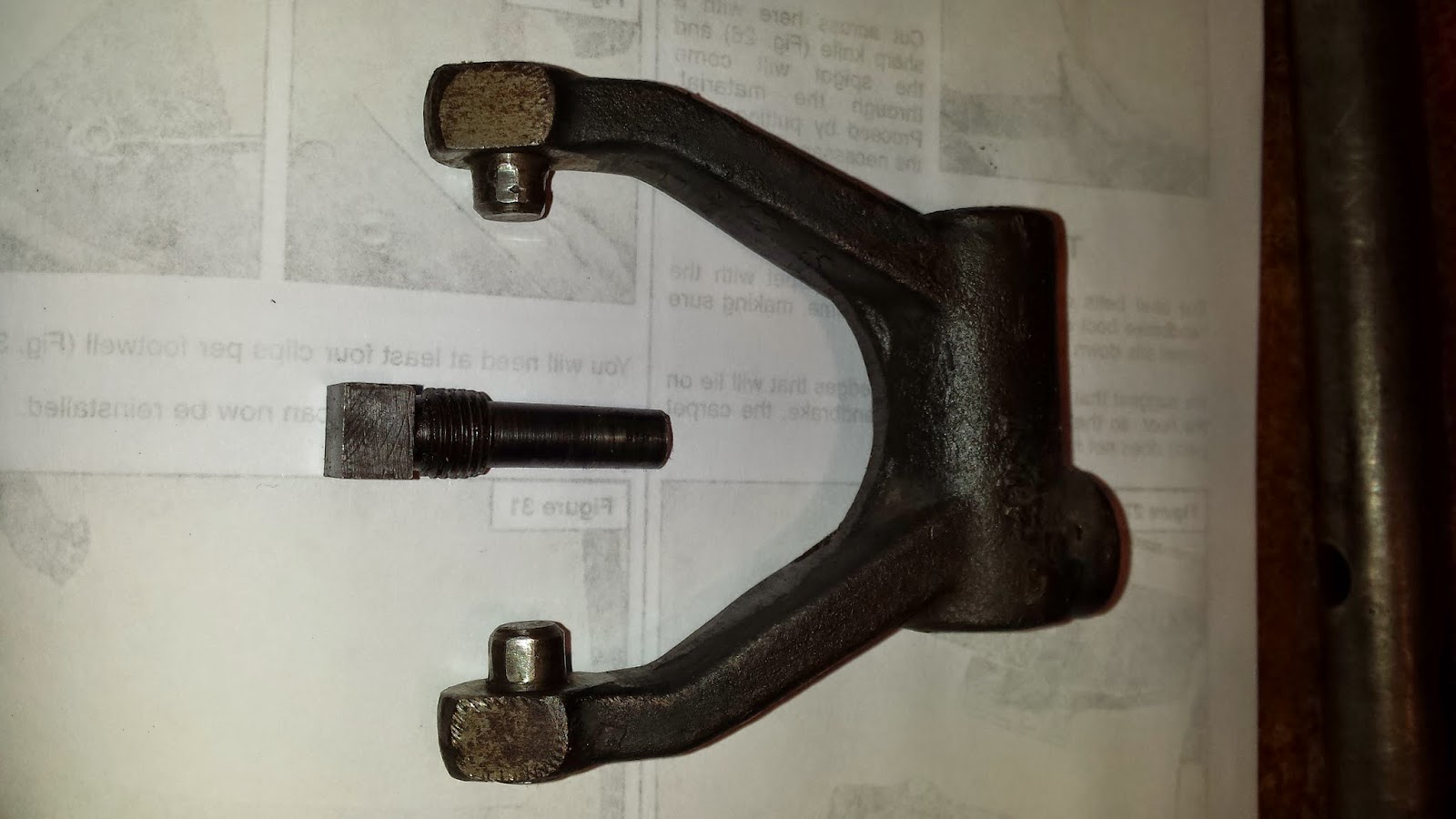 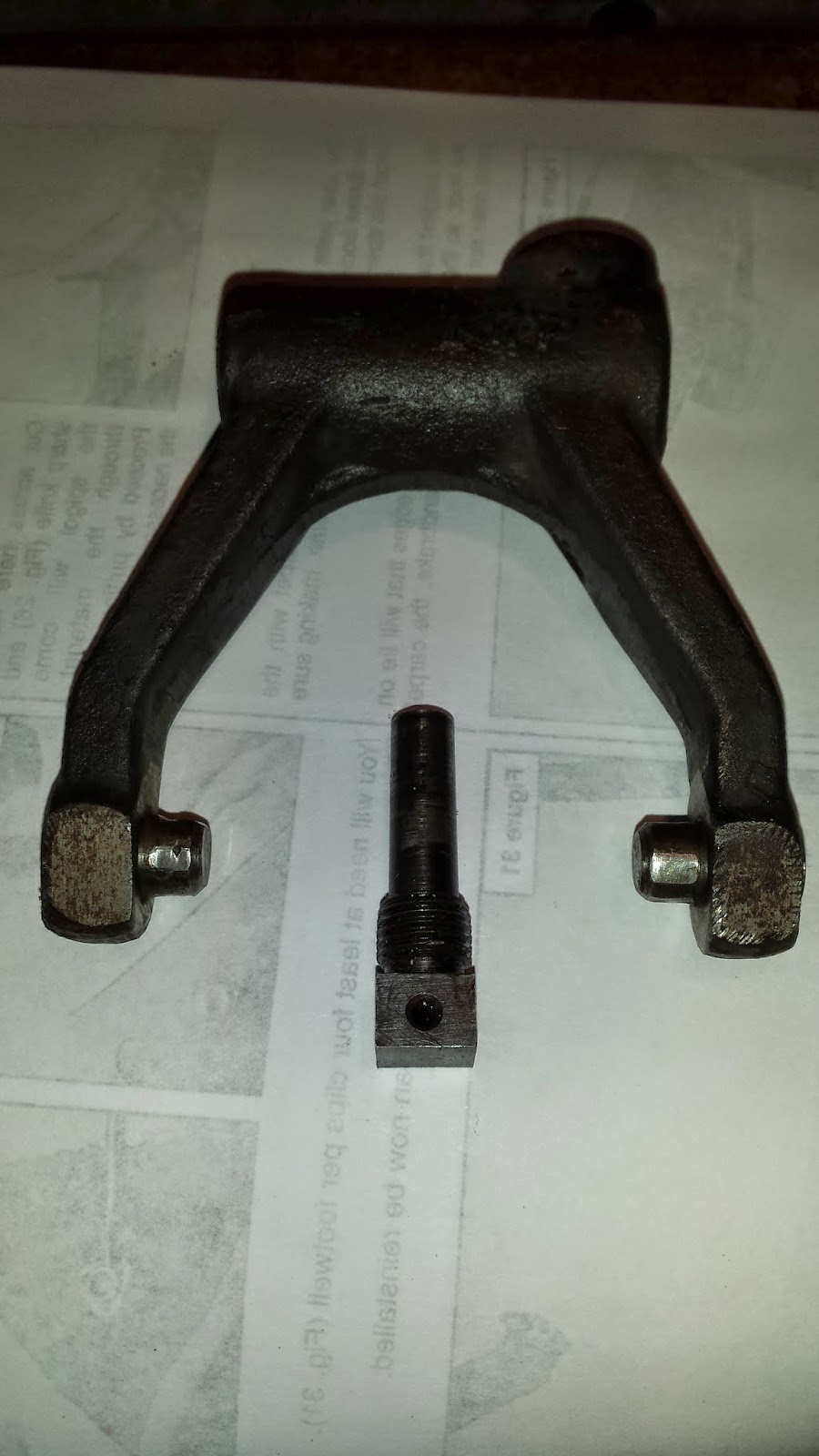 The fork, there is some wear here but I don’t know if it’s bad enough to replace the fork, need some advice here. 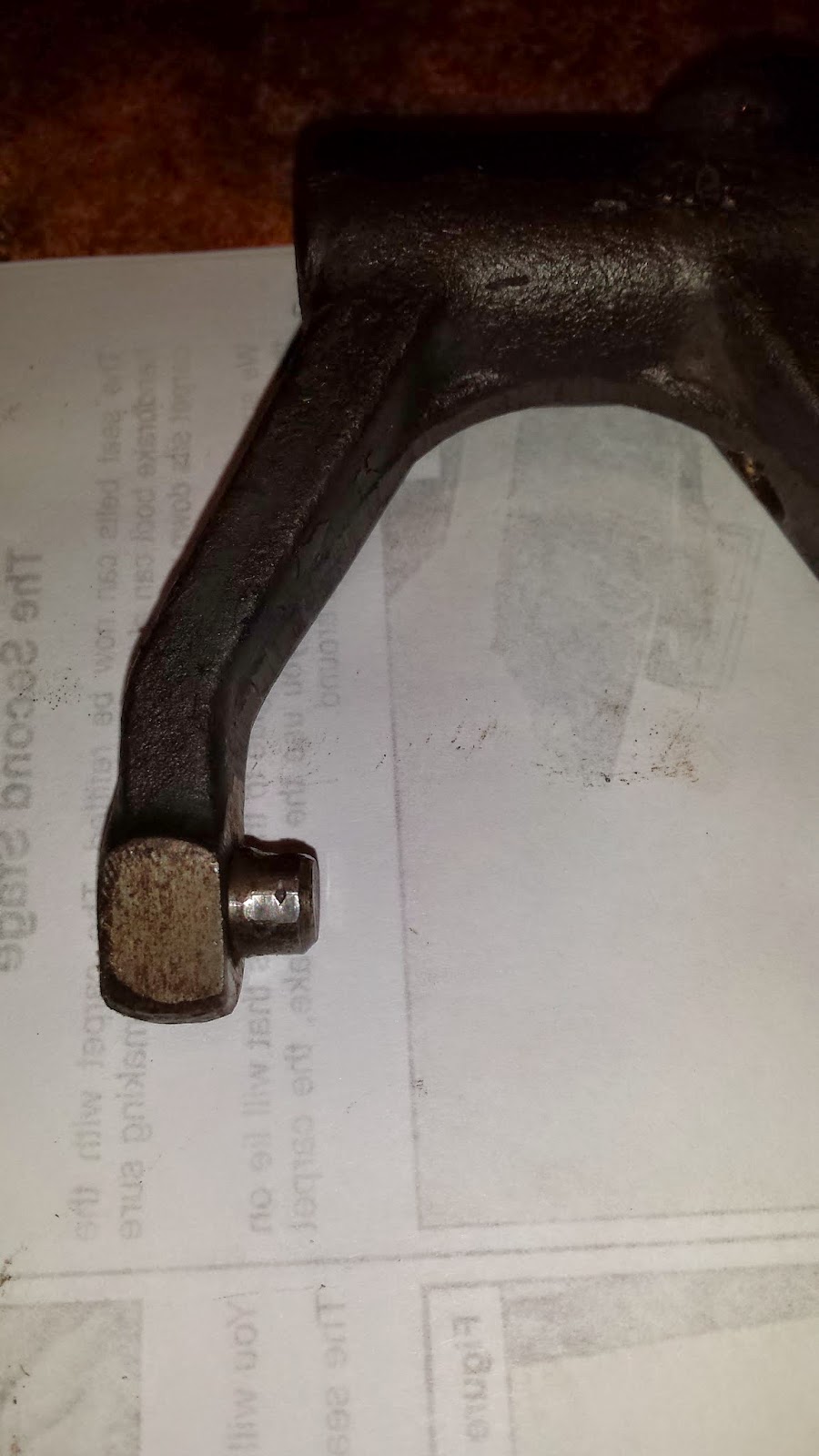 Cross shaft – this is the part where the taper pin sits, looks like it’s seen some action and has been apart before but it’ll go back in. 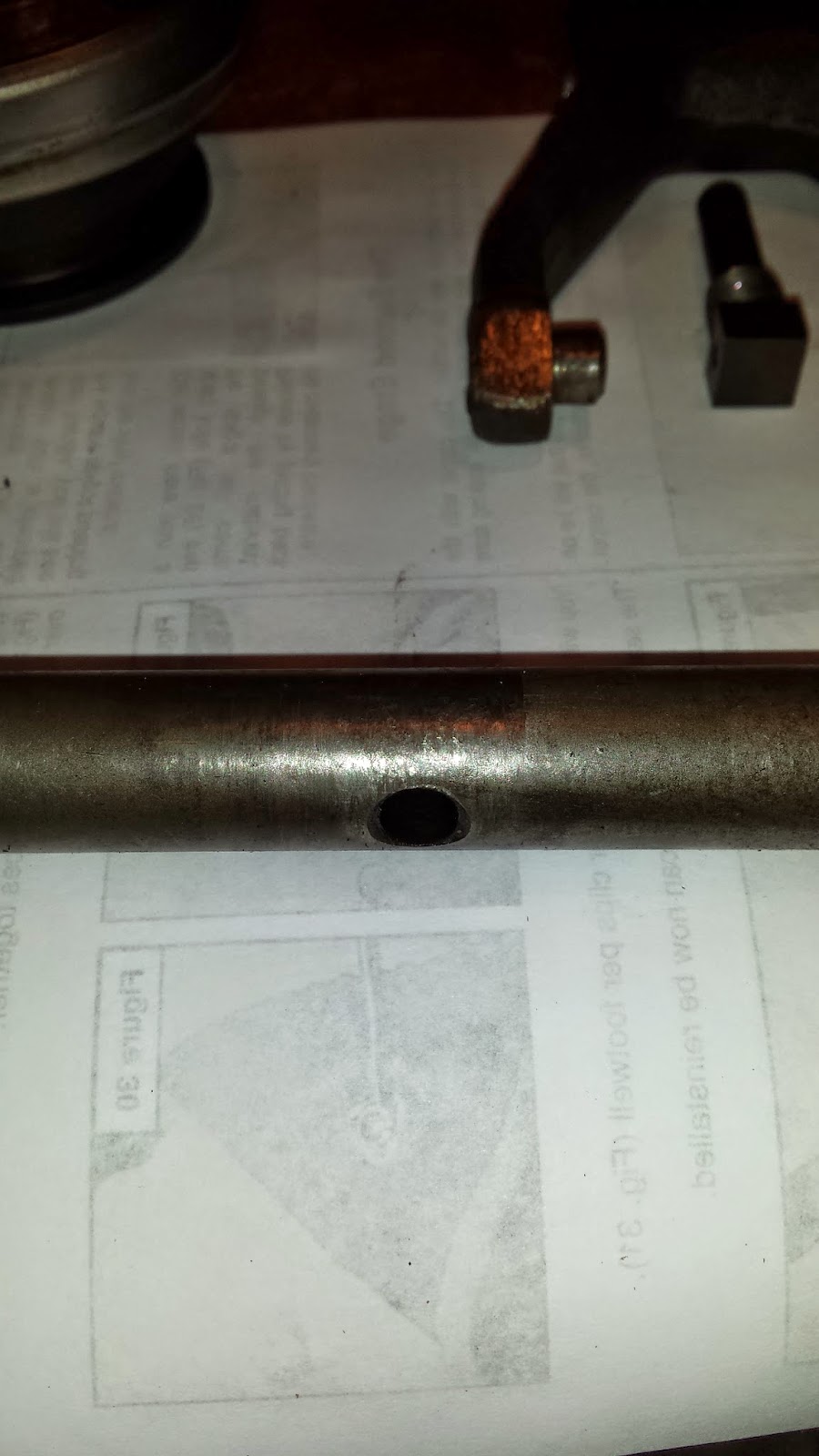 So what does the collective wisdom of the interweb think?

I've come in for a cup of tea and some pondering, the next task is to have a look at the clutch plate then make a list of bits and dig deep. It will have to wait a little bit, I have a job interview tomorrow and that takes priority!