Well what an epic that was, took me the best part of three days to rebuild the seats on the TR. The covers were very good and so they remained, the frames were excellent and the rear webbing was great but the foam and diaphragms were totally shot!
New diaphragms and foam were bought from Dave at Canley Classics, although he doesn't publicise it much, he does do a lot of TR stuff.
Spray glue and webbing had been bought up front from eBay. I didn't need the webbing and clips so if anyone wants some, shout and you can have it at cost.
The biggest problem was that whoever fitted the covers over the old foams had trimmed a bit off here and there making it quite tricky to refit. The end result is so much better than they were, it's the difference between sitting on a sofa and sitting on a stone!
Other jobs done include fitting the eBay bargain new sun visors and replacing the coolant hoses. I usually do the hoses on a new car as they are something I have had issues with in the past and when one lets go in the middle of nowhere on a dark night it is a pain to fix!
I am pleased I did this as I uncovered a very corroded steel bottom hose which had a nice tidy outside but a scaly inside. Inspection revealed a tiny pin hole so that stopped me but with the TR national on this weekend I will be there Sunday with a shopping list as long as your arm including a stainless pipe!
Other jobs done include a DIY rebush of the throttle pedal which was so worn that there was in fact no sign of the original bushes, no trace whatsoever!
There were corroded contacts on the Kenlowe controller and the fittings of the fan to the radiator, all a consequence of storage I think. I have made up some new mounts but they need work, I'll see if I can find a better solution. The controllers terminals have rusted away and it's seized solid so I bought a new one.
In general the car has been fighting me every step of the way, the nut splitter has been out on several occasions and I have lost a bit of knuckle skin to the car but I think we are making progress. The objective is to get it reliable and use it as much as possible before the RBRR keeping modifications to a minimum unless opportunities (ie cheap parts!) present themselves.
The paint job is good and I'm pleased with the work Brian did for me which came in on time and within the modest budget set.
I'm off to see my parents for the weekend and will be at Malvern on Sunday, probably with my Dad in tow.
Anyone want a rollover bar? I didn't like the look of it on the car so it's on eBay now. 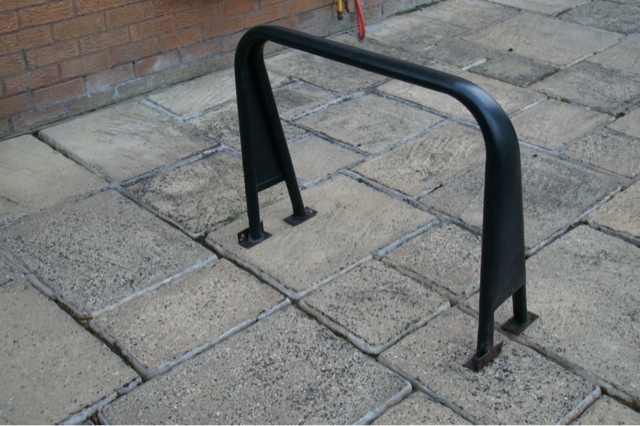