It seems like its been a long time coming but I've made progress. The new springs and shocks are all on the car. When working on the rear we found a missing stud holding the hub to the trailing arm and then soon found why, a stripped thread in the trailing arm, a pretty common issue, so I got a Helicoil kit and fitted a UNC insert and new stud, the original stud is UNF both ends and not ideal for alloy so now it's UNC into the Helicoil and original UNF hug side, new stainless nylocs completed the job. 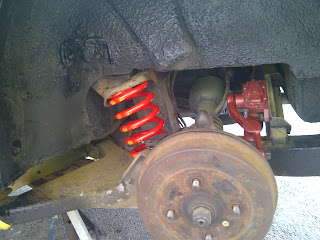 It feels a lot more sure footed but it does now show up that the wheel barrow handle exhaust hangs pretty low. I will see if I can have a go at raising the pipes a bit.
Tim Bancroft came round on the weekend to help me fit the exhaust and suspension, this didn't go too well! The manifold fitted really well but the system seemed to be missing about a foot in length so we had to strip it all off and put it all back to how it was. The manifold fouls the support for the plenum chamber so I will need to design something to get round that when I come to fit it all again properly. I think I need a new main pipe for the system, the back box is OK but the pipe has had a bit of cut 'n' shut done, which I knew about when I bought it, but it's just a bit more than I had bargained for. It's a Rimmers system and they have given me the correct dimensions so I may have to just bit the bullet and cough up the £80 for a new pipe.
The inlets are again balanced and the engine seems to run pretty well now, they are of course very clean and new so it's hard to get a gas tight seal on the butterflies but it's far better than the worn originals. I would recommend Neil Ferguson's PI parts, he's a good bloke and the quality, attention to detail and service was excellent (thanks again Neil!)
After the weekends work I feel I've now got over my previous feelings of apprehension. There's still a bit to do but at least the fundamentals are sorted. I won't be changing much now, just running it and tweaking a few things.
Last night's test drive in the dark reveals that the headlight aim is crap although the lights are good, better that the seal beam "candle in a jam jar" efforts of before.
Tickover is still a little erratic and seems to rise a little after a run, I suspect the old vac hose to the metering unit isn't 100% so I'll get a new one of those.
The car pulls well and feels like it has more to give. I am concerned about sticky rings and oil consumption, the only thing to do is to keep checking it, pack plenty of oil for top ups and spark plugs in case of fouling.
On the "to do" list - I need to build up a set of injectors and put those in, I'm not sure I'm getting decent performance out of the assortment that's in there at the moment - two screw in "long" types, one crimped end one (the type that can't be repaired) and 3 "normal" ones albeit two without pintles - all in all a real mixed bag. They seem to perform OK although the crimped one went in the bin last night after it dropped to a dribble the refused to fire at all! I'll make up a set and throw all the rest in as spares - I know they will run in the car so they'll get me out of trouble.
I was disappointed with the wiper motor performance and stripped down the motor to see if I could improve things. It is better now and doesn't seem to be about to fail but still not great, new blades and rain-x should help.
The interior is still all over the place, I have an overdrive logic controller to wire in and some interior lights to sort out. There were no side panels to the tunnel and now a big hole where the useless radio used to be so it looks a bit crap, might tart that up if everything else is OK and I have the time.
Then I think it's hard top on (need to get the fixings from a mate, who has promised to post them to me) and give it a wash and it's first polish (it was fresh paint when I got it) then all is good for stickers and RBRR.
I'm pleased I've got it to this point now as I have to be in Milan Tuesday & Wednesday which isn't ideal but I guess it pays the bills!
Oh and in amongst all that we've had a new boiler, cylinder and the floors up to solve a heating issue, then there's the deluge of entry changes, updates and questions - it's busy busy here at Chinn Towers!
Posted by Jason at 1:04 pm