Well that was fun. Nigel and I finished 2000 miles in 48 hours in a car that up until 2 months ago had not been anywhere for at least 2 years and had done very little in the previous 18 or so. 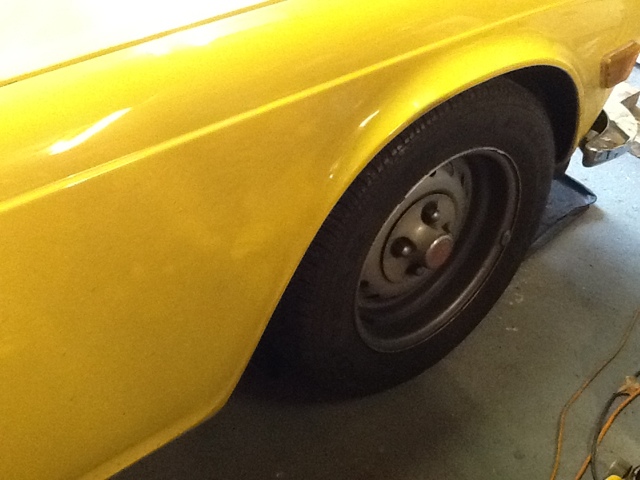 As you can see, we worked the car hard, at least the brakes did.

It wasn't all easy and there were issues along the way but we completed the course, have a full set of signatures in our road book and more importantly still have the car, our friendship and sanity mostly intact.

Having prepared the car I was fairly confident that I had covered the ground needed, there was nothing in there that was suspect, well not much. I was not 100% confident of the radiator, there is a tiny leak somewhere that I have been unable to find. Rad weld is in there and I packed some extra water. Oil consumption seemed a little high, I was worried about that but and had packed a few litres of oil spare.  There rest was all good.

However, it didn't start so well, when we packed the spares and kit the car sat uber low, too low but what could we do? Well we could ditch a few spares and that water, that might lighten the load. However, I was with seasoned RBRR driver Nigel Gair, a man with some previous when it comes to spares carrying (his spares cache had got me out of a problem a few years ago, here was a man who knew what to carry). Of course that's fine if you have a big saloon, as Nigel does usually, but a TR6, not so spacious.

So, we packed and scratched our heads but we got it all in and were ready to set off, very early but then we thought we'd chill when we got to the Plough and soak up the pre-start atmosphere.

Yeah, it didn't really happen like that. As we drove off the exhaust clattered on the slightest of bumps in the road and that was before we encountered a speed bump. This was not a good start! We drove about half and decided to turn around and do something about it. That entailed getting the twin pipe system up as high as we could but it's not so easy in a TR6. The system was badly fitting in the first place but I think we improved things. I guess we could have gone back to the standard springs on the rear but there was no time to do the fronts too. I didn't think that was really necessary so we repacked and set off again.

We made it to the start in good time, no dramas and no clattering of the exhaust but we were still very low. Time would tell.

The start and up to Blyth was pretty unremarkable. We had fuelled up and checked the oil, seen that it was leaking a little around the rocker cover and using a bit so we topped up, resigned to doing that every petrol fill. The engine was string and pulling well with a slight tendency to run on 5 every now and again (or rather it sounded like 5 - more on that later). We left the Plough pretty close to the start, probably about 18:10 and arrived at Blyth at 21:02.

Carter Bar aka Lambrini Halt came up at 00:44 and we dropped off our border payment of a bottle of Lambrini for Mc Jim, he was so pleased - I hope we can do something similar next time.

We'd noticed that our headlights were crap well main beam was useless and dipped seemed to be OK but not for the occasional oncoming cars. We had fiddled with the aim before we left as there were a lot of new components in there including a headlight bowl and both lenses and lamps.

Arrived at Edinburgh at 02:15 and whilst Nigel signed in I took on the headlight fault finding. I figured it out, the wiring colours were wrong and who ever put the thing together in the first place had got the dipped colours wired into the mains and vica versa. Not really an issue until I replaced things and connected it up "correctly". So although I managed to wreck a connector I was able to bodge it with a terminal block from my spares, the rest of which helped out another crew later. We were away with decent lights at last. Oil consumption was looking like about half a litre for 300 miles and it was coming out of the rocker cover screws, a bit out of the top and at the rear - a bit of a mess really.

Skiach came and went at 05:46 and we made the Seaview hotel at John o'Groats for 08:10. The gods greeted us with a rainbow as we approached Jo'G 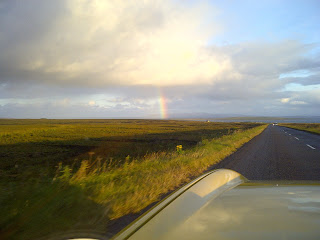 Arrival at John o'Groats was magical!

By this time we had clattered the exhaust a few times and the engine tune was starting to go a bit weird. Seemed like a misfire but not a misfire, I had been here before....

The 2.5 PI saloon had suffered a similar issue that was down to throttle synchronisation. The Lucas system needs all 6 butterflies to open and close exactly together. If they don't then the car runs like a bag I' shite. We were getting there with the TR, not good.

By the time we got to Conan Bridge the exhaust was blowing and we couldn't really just ignore it. We couldn't do much but with an axle stand from Carl Shakespeare Nigel was able to get to work on the pipes. There was a bit of swearing, some hitting it with a hammer, some head scratching and some more swearing. We had lost a nut from one of our improvised mounts, fixing that made it better but not great. I found an under performing injector and swapped it out with one of the 6 spares I had built up. We were off again.

We reached Morrisons early and were able to use the time to clean up the rocker box and daub some sealant on the leaks. This proved to be a good idea and slowed the leaks and the mess. The exhaust was OK and the rough running was no worse and only really an issue under 3000 revs. The intention was therefore to keep it over 3k :-)

The run down to Tebay services was OK, fast driving on the motorway was good but the issue was still there. We decided not to mess too much.

Gledrid came up and the rough running was getting worse. We were fortunate to get some opinion from Andy Roberts who confirmed what we thought and sort of have us a bit more confidence. The problem was not metering unit injector or ignition related, his diagnosis was that it was throttle synchronisation. We just had to get it to the right settings!

We decided to crack on and get to Sugar Loaf as early as possible and maybe put some time into the car to fix the issue.

This was a good idea but we didn't really factor in just how bad an out of tune car can get, how foggy it can be in Wales at midnight and how pissed off the crew can be when it's all going wrong. The car was almost undeiveable in those conditions of road and weather.
It was clear that we either had to fix it at Sugarloaf or quit. We were that screwed. It's here that I was glad that Nigel was with me, he persevered with the settings and after an hour we had made it worse then much better! We were back in business.

To say that the car was better is an understatement, it was transformed and I drove it hard out of Wales into the Gordano stop. It still wasn't 100% as we didn't quite have full throttle travel. We got our book signed right at the edge of the time window but we were still in the game. Nigel tweaked it again and we had more throttle travel.
We drive hard to make up time and passed through the Oakhampton control at 5:58, in the middle of the window.

The drive down to Lands End was spirited, the exhaust issue was all that was really of interest. By the time we got to Bude we were making up lost time and were ahead of the game, getting there 10 minutes before the control opened.

The weather picked up and so we dropped the roof for the next few hundred miles. This was new territory for Nigel who had never done any open RBRR motoring. We weren't really equipped for serious top down driving but enjoyed it all the same.

Badgers Halt came up and we were still in tune and on time. Oil consumption had reduced but that exhaust was still looking dodgy. The back of the car was covered in a film of oil and road dirt.

The rest of the run was pretty straight forward, that is until we were about 20 mins out of Didcot. The exhaust let us know it wanted some attention,as Nigel negotiated a speed bump at the gentlest and slowest speed imaginable it parted and we sounded like a tractor.
Time to find a kerb to drive up and get underneath again. I told Nigel to pull in and I'd try something. As I understood the mechanics of the problem, the geometry of the exhaust and the relationships between the pipes I was able to apply just the right amount of force to the tailpipes to rejoin them. Yes, that's right, I got out and kicked the tailpipes as hard as I could and they clicked back into place. We drove on :-)

We made it back to the Plough at 19:07 and celebrated with a slap up dinner. It was another great RBRR and the car and crew survived.


As we left the Plough the pipes fell apart again! My booting them didn't work so it was out with the overalls and Nigel was back under the car. He got them back together and we made it home OK. The post RBRR sleep has to be the best sleep ever! Claudia couldn't wake me and so she just went to work and left me there! 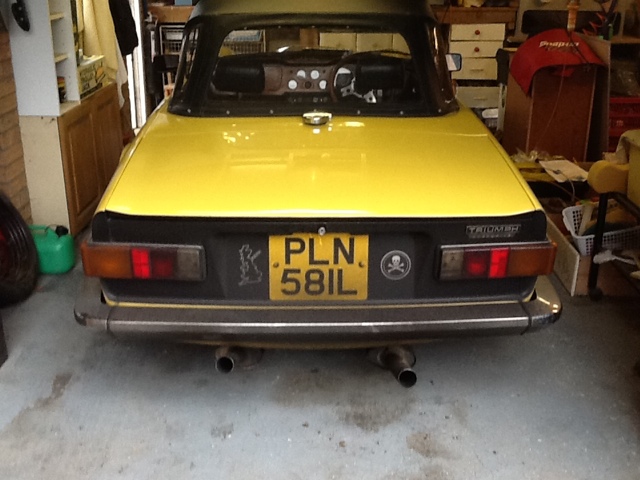 She did us proud despite having a dirty bum! Those pipes have got to go.


I will work on the snagging list tomorrow and start looking for bits to replace that exhaust!