La Carerra Caledonia - been there, done that, got the Quaich 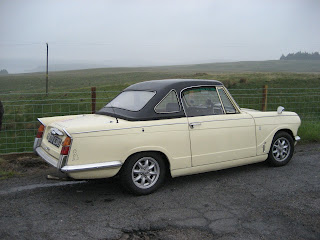 Well we did it, started and finished a CT event in the Vitesse, the demons are exorcised and all is well with the world again!

Above you see the Vitesse with it's badge of shame on the rear flank, a CT RBRR sticker with the "RBRR" bit removed - the crank broke before the car could start the event!

So what was La Carerra Caledonia? For me it was 1362 miles of hard driving and good company. Here are the highlights and a few low lights!

I went up to Canley Classics to collect my co driver, Dave Pearson on Thursday. The usual preparation was done - change oil and filter as the engine had only done 300 miles by the time I got to Dave's and was still on running in oil. I also tried to cure the annoying prop shaft fouling the chassis - sort of improved it but it's not 100%. Whilst the tunnel was out I changed the gearbox oil for my fancy fully synthetic Redline MT90 - seemed fine all the way round.

Secret weapons had been promised and these were a pair of new uprights and spherical bearings to replace the front trunnions. They are a derivative of the Caterham uprights. I'll do a full write up on these in a few days - suffice to say they are stronger, maintenance free and easy to fit - my car is now trunnionless! Pictures and details later in the week.

We were still doing most of this on Friday morning as both Dave and I had "issues" with oil - I managed to drain mine onto the workshop floor having knocked the drain bowl aside as I removed the sump plug! I then made matters worse by adding new oil with the sump plug still out - school boy error or what? Lucky I noticed before I put the whole can in! Dave had a TR6 that he had to sort out, the filter bowl in that just would not seal and it threw out it's oil too!

Friday's drive up was great, right up to the point we lost power and coasted to the hard shoulder, 10 miles from the Pendle and Pennine meeting! We limped it there but the car was not happy - it seemed to be that it just wouldn't run for long before coughing and spluttering, banging and farting - oh, to be fair, most of the farting was Dave.

We had a tinker at the meeting, it was obvious it was running super rich, the plugs were sooted up, I put the spares in. Maybe the air filter was restricting things? I took it off.

We ran up to the start at Gretna and again, no real improvement. It was touch and go but we limped it in. Some head scratching at the start - could it be heat related? Could the new metering unit be seizing up as it got warm? Could it be ignition! Coil breaking down?? Dave Langrick produced a coil, we zip tied it in place and plugged it in, we were running out of ideas. We actually did the whole event with the coil zip tied on and no air filter as it was too wet to be standing around outside to change it.

So we set off with the car popping and banging and shooting the odd flame. About 15 miles down the road we pulled in as it died once again. We just could not get it running right again - 12 inch flames out the back nearly toasted Dave Langrick's car - he'd pulled in behind to offer assistance. We waited a while, cooled the MU down with some water and checked plugs (black and sooty) - we took off again for one more attempt to get going but it wasn't long before we were in a lay by again.

This was one of those low points where you just feel miserable. Nothing you do seems to matter, it defies logic. Then you start to think about recovery options, we were about 20 miles West of Gretna Green in the middle of not a lot, that's near to the middle of nowhere but not quite! I had sent a text to Gareth Thomas on the off chance he was able to offer some advice - fair play too him it was a Saturday and he called me, very concerned and very helpful. He was in Devon so not too good for hands on action. We started going through the symptoms, could the MU have failed - everything pointed to a fault with it. He was reluctant to encourage us to start taking it apart as it was under warranty but when you're on the side of the road in the middle of an event you gotta do what you gotta do! We'd already had the side cover off (no mean feet in the restricted space a Vitesse offers) to check that the vac unit was working (it was) and Dave was about to have at it when Gareth asked whether there was much spill back from the MU - Dave had the pipe off and there was the normal amount.

Then Dave noticed it, the pipe was blocked - it was hard to see how but the pipe was definitely blocked - Dave hacked it off with my penknife and re-fitted it. The car started and ran badly for a while. We thought well lets try it.

If the spill is not allowed out of the MU pressure builds up inside and can force the shuttle into the rich position or at least restrict it's movement. This could be the cause of our problems. We then gave the car some serious maximum attack driving to get back on the route. It was clearing and things seemed to be better, only time would tell.

We had waisted far too much time we thought, we were amongst the last to start and had been roadside for probably the best part of an hour or more. We picked up the route but thought if it isn't fixed we really could be with being somewhere where we could fix it so we decided to cut some of the more remote parts of the route and head straight for Ayr - if the car was OK there then we could re-join the route and carry on. If not, well we'd worry about that later!

We drove the car hard, it responded well! Confidence was restored and we pushed on.
We were without incident and arrived at Arrochar ahead of most of the field, it had been a day of highs and lows. 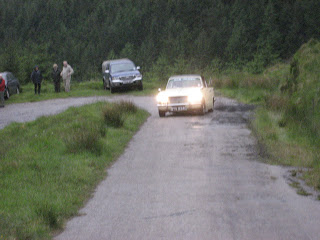 The above pic is the car on the Rest and be thankful rally stage, a little sideways on the exit from the hairpin. Sorry the shot's a bit shaky but I was stood in front of it at the time! Dave was driving, I'd had an earlier run and was still smiling like an village idiot.

Day two was wet, damn wet - all day! Luckily I had, after 2 years of bodging through the MOT, replaced the wipers with new ones - bonus, they were just crap now, not useless as before :-) 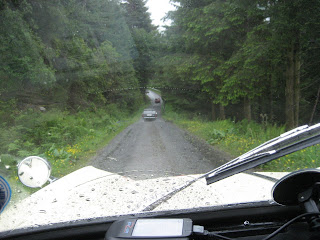 We really enjoyed the run up to Aviemore, there were some great roads, a highlight for me was the last 30 miles in, a glorious third/third overdrive winding up and down, hairpin and blind summit road that ended up going through some semi wooded riverside scenery. We were on our own, no traffic and it was great, I was enjoying it so much that I failed to notice Dave sat next to me had forsaken the maps. "Where are we?" I asked him, "I dunno, I'm too scared to look at the map!" he replied.

And then we were there, at the end for much beer and chat - tales of moments and offs, mechanical maladies and moments of stupidity. Exhausts lost, paint work and egos bruised, misfueled cars and of course our own 12" flames but the end result was a load of contented crews in cars they love. It's an event I will definitely do again and if anyone reading this is thinking of a Round Britain - do LCC, it half a Round Britain with beer and beds.

Stats for the crew, all are approximation or blatant lies
1362 miles driven
65 Gallons of fuel used (gotta work that out properly)
22 MPG average including producing those 12" flames
Max GPS verified speed before the driver ran out of bottle - 107 mph
Max unverified speed as the GPS packed up - 115 mph
Happy cruising speed 75/80 mph - the car feels stable and unstressed
50 pints of lager/beer drunk
2000 litres of methane produced