Well you know it is, you drive the car and little things annoy you so you think "I'll fix that" then something breaks or wears and you think "Must get a new one of those" then you take your other car from an MOT and you get an 'advisory' so you think, "I'll buy some new ones and fit them now".
Then you see a bargain and think "I'll get those as they are cheap" and so the list of things to fit and fettle starts to mount up! 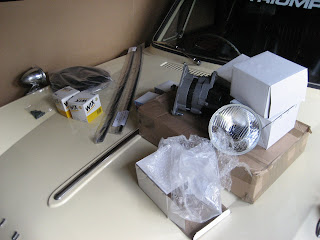 So here we have, in no particular order, a 43 amp alternator for the Vitesse - with that PI pump and 100w headlamps plus all the other odds and sods there's quite a draw. We experienced some weirdness on La Carerra with the power outlet for GPS and phone charger etc - it has some electrickery that turns output off is input falls - seems when we had everything on inc wipers and blower fan, the outlet would turn itself off! Hardly confidence inspiring. With 10CR on the horizon we will need all the electrical power we can muster.

Also in the pic are the new outer weather strips and clips for the doors, fed up with the rattling windows! Also a new boot seal, the old one has finally given up and disintegrated.

There's a couple of fuel filters for the PI - I have some US sourced chrome Hi Flow filters to try also but the ones in the pic are just standard ones.

A pair of front wheel bearings - a previous owner had renewed one side and assembled the bearings with the felt seal facing the bearing. This leads to it being chewed up but the rollers. The other side was correct but the felt seal had worn badly. The felt seals are crap, even when new - there is an alternative. Leon wrote to me from the states to say he's found some "nilos" seals that are the dogs danglies - having had a search around I can see that there would appear to be superior to the felt in every way. No idea of price yet or indeed whether I can get them local or will have to get them from the States. I'd never heard of them before - anyone else heard of them? I found this with a quick Google

Not in the pic are a pair of new discs for the wife's car, that was the advisory on the MOT. The disc weren't great when we got the car but they work OK, just a bit frilly. A new pair of solid discs are an easy cheap fix. I run solids on the Vitesse as well, now without dust shields - they seem OK, never faded them yet. They must be about ready for some new pads - I have some on the shelf I think, some nice old asbestos filled ones :-)

Finally, the "bargain" well not really! I wanted to find some RHD headlamps that would take the H4 P43t bulbs I already have and keep the LHD P45t set for overseas work - although as I have loads of nice high power P43t bulbs I may just keep them in, including some rather nice ice blue 120w ones! Anyway, I've been watching eBay and saw a guy selling all sorts of cheapo headlamps so I took a punt and asked him if he had any 5 3/4 inch headlamps as I needed 4 - of course he did and they were mine for £20 plus a tenner to post them. So, not expecting great quality I thought what the hell, I bought them. Yes they are no name made in India and don't look the best of quality but they are what I needed and have the sidelight bulbs already inside. Not much use but at least the sidelight bulb being fitted means you don't have an open hole in them!

I have another set of RHD flat Lucas 5 3/4 lights that take the P45t bulbs - these are some ex-military things, packed to withstand a nuclear war! One seems to have been removed form the packing and left in the stores like that so it's a bit "shop soiled". I'm not sure what to do with these, I think I'll keep them as they are nice quality.

And finally, not in the pic is a new steering coupling to cure what seems to be the start of a little play in the steering.

Well the shopping was the easy part, gotta fit them all first - mind you , gotta clean the car soon, it's still covered in La Carerra crap. That reminds me, I took the front sticker off, must go out and do the back one now.