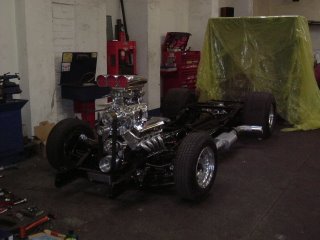 I' ve taken the family down to Penzance for a few days to see some friends. It can rain here, a lot! Chris is into his American cars - two Chevy pick-ups and a Dodge van currently. He used to have a Shelby Mustang GT500 - a real handful but he traded that for some cash and a chopped Chevy truck.
Being a lifelong fan of Yank tanks he knew he wanted a little more power so he went fot the 1000 hp crate motor, mahoosive blower and a 400 hp twin tank nitrous system!!
Here's the frame and engine, the truck was a little more together when I went to see it with some nice paintwork and detail - he reccons Christmas will se it out of the garage and on the street. More photos when I get home tomorrow and can pull them off the camera.
So, I got my petrol head fix whilst I was down here :-)

I also notice whilst I was away that some wag "borrowed" my Club Triumph identity and put up a few baffling posts - I think it was Dave Pearson (or maybe Jason Lee) from Canley Classics - I will have to look them in the eye when I'm next there and see who it was! The attempt at outing me as a soft furnishing loving ballroom dancer might have worked were it not for the poor grammar and punctuation. I'm not the best at sentence construction but I ain't that bad!