Well not quite but it has been part of the family for a while now albeit in the hands of my wife. The Sixfire is up for sale and will be at Stoneleigh on Sunday. We've got to the stage now where using it as a daily driver isn't possible as Mrs C needs to carry both kids around an well a two seater just won't work. We don't have the space for yet more cars (although I am still working on that Mk1 (or 2 for that matter) PI dream of mine.
We're just in the final stages of sorting out some fettling on the car which is up at Canleys.
So what is it that's for sale? Well I did some blurb and will take some up to date pictures on the weekend so I can put up a web page for this so anyone interested can get all the detail. Here is the sales pitch. I'll hit the press with it too. The replacement's already bought and in service :-) 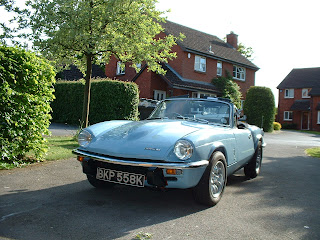 The car that Triumph never made but should have so it's been left up to the enthusiasts to do it. It's a popular conversion because it's relatively straight forward to do with a set spanners. You take a Spitfire tub and add a GT6 bonnet, engine and running gear. OK so maybe it's not that simple but you get my drift!

They get called a Spit6, Convertible GT6, 2 Litre Spitfire, Gitfire or in my case "The Sixfire".

This car wasn't built by me, we've owner it for the last 4 years and I know it pretty well!

Working through the mechanicals there is a GT6 / Vitesse hybrid engine based on the 2 litre Mk2 block with the big valve Vitesse head. It's recently received a refresh with new pistons, rings and bearings. There's a bunch of bills that go with the car, it's never wanted for anything. The head has hardened valve seat inserts so it can run on unleaded without risk.
There's an oil cooler with spin on filter and thermost. Starting is by Hi Torque geared starter that I added soon after getting the car, the standard starter struggled to cope with hot starting, there are no problems with that now.

The exhaust is an all stainless two silencer system in standard look configuration. The manifold is a tubular stainless item.

If you'd like a sportier exhaust note you can remove the centre silencer and replace it with a straight through pipe, that would also cure the occasional rattle that you get with these two silencer systems as the central silencer can sometimes touch the main chassis rail, this is usually on tickover. Doesn't cause anything more than a slightly annoying rattle. 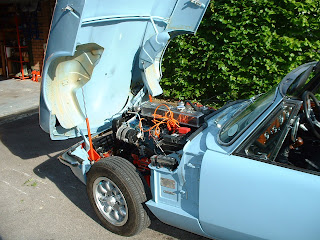 A stock 6 GT6 has twin Strombergs carbs, this car has twin 1 3/4 inch SU carbs with an ITG foam panel filter. 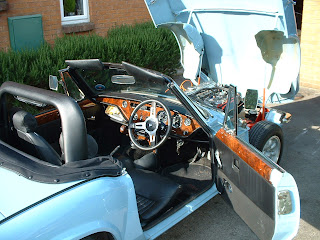 The gearbox was annoying when I got the car, it leaked and had a weak synchro on third, a common problem. It also had a D type overdrive fitted which is fine but not the quickest or strongest of overdrives. I replaced the lot using a New Old Stock J type overdrive I had and a fully reconditioned gearbox built by Mick Papworth. The box is sweet and all synchros work as intended, overdrive kicks in and out on third and fourth with no hesitation. When I replaced the gearbox I also took the opportunity to replace the clutch driven plate.

Cooling was an issue when I got the car and I had several attempts to get it right as the original builder had tried to use a Saab radiator and custom plumbing. It worked but was marginal so when the radiator developed a leak I went back to a standard using a reconditioned GT6 radiator with a high efficiency core. I added a Pacet solid state temperature controller with sensor in the top hose. This allows you to adjust the temp at which the now electric fan cuts in and the dwell or duration the fan stays on for. The system is wired so that it's always live, that is to say that once you turn the ignition off the fan remains live, cooling the car until the temp drops to within the setting you make on the controller - it's a similar set up that you'll find on modern cars, apart from the adjustments. The fan controller recently failed and Pacet replaced it free, so you have a brand new one on there now.

Rear suspension is by swing spring and pretty conventional for a Spitfire, it has a lowering block in it so the car sits nice, I didn't want it too low as we have a lot of speed bumps here. Front suspension is by 330 Lb springs with Koni shocks. Brakes are all standard and work very well, the car doesn't get driven hard by my wife and she likes to have confidence in it's ability to stop in traffic. There's a servo on the system to assist. The handbrake works fine and has no trouble getting through the MOT. The front brake discs show some corrosion and I had intended to fit a new set. I never got round to it but I have the parts available at extra cost if you share my feelings.

Wheels are Minilite replicas, the previous owner told me that they are actually Lotus Europa rims they are in excellent order with no kerbing or corrosion. There's a steel wheel spare. Tyres are all good with plenty of tread.

Internally the car is in excellent order, when I got it the seat foam was original, after a while it started to disintegrate so I rebuilt the seats with brand new seat foams and leather covers, I also rebuilt the headrests. There's a walnut dash and door cappings, a radio/CD player and full array of instruments including and electric tacho and a conventional oil pressure gauge. There are inertia reel seat belts and a leather bound steering wheel. Carpets are in excellent order and black. There's a set of black carpet mats too.

The car has a padded roll over bar fitted, this also houses a high level brake light. To be honest, I don't like it and have always wanted to remove it but my wife, who's the main user of this car, likes it - so it stayed! Undoing four bolts and one electrical connection is all that it needs if the new owner shares my dislike of the roll over bar.

Starting the car is interesting as there are a number of anti-theft features, the previous owner liked his tricks and I have kept them all although they are all easily removed or bypassed if you know how they work. There is a kill switch, special starting "routine" and an electric remote fuel shut off valve. I'll explain them all to any purchaser face to face.

Electrically the car has been brought up to date with a high output alternator, H4 Halogen headlamps currently running 100 watt bulbs. The headlamp system is all via relays so it can take the extra current draw. In fact most major components are now running through relays and a modern fuse box. This means that there's a lot more protection than the standard 3 fuses and no relays! The battery was new when I got the car and we keep it hooked up to a battery conditioner system when the car is garaged. During my ownership it's been kept in a dehumidified garage.

Externally the paintwork is excellent, the car was repainted in Wedgwood blue and all chrome work was re-plated before I got it, it looks very pretty. There are subtle "Sixfire" badges in the same script as standard Spitfire badges - you have to look carefully to see them. I've replaced the windscreen wipers with new stainless arms and new blades.

When the car was put together, the builder used a tub from a US import from California, a so called "dry state" where cars simply don't rust at the rate we're used to. The doors are also US spec but not Spitfire, they are "federal" GT6 doors with internal side impact bars. This means that they also have quarter lights which is an unusual feature on a Spit6. The bonnet is UK GT6 and when I got it it had an unusual gas strut lifter arrangement, it wasn't the most reliable so I've replaced them with some beefier struts and they are fine now.

The hood is black vinyl and has clear windows, there are no holes or tears in the hood. There are a couple of wear marks on the quarter windows with a couple of approx 1 cm splits between hood and window. These were there when I got the car and haven't spread in 4 years, the hood keeps the water out. There is a mohair hood bag in black that makes it all look very tidy when the hood's down. I also have a tailored waterproof cover that can be used a dust cover, this is available for sale should you require it.

My situation's changing and we need a car with seats for both kids so the Sixfire has to go to pay for the Saab we've already bought! I have to say that I'll be sorry to see it go, my wife may even shed a tear! 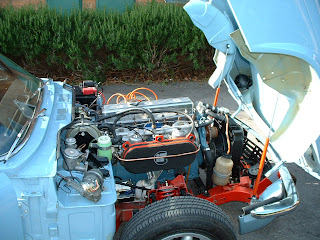 Although this was an entry about suspension it's a nice picture of the "Sixfire" badge! 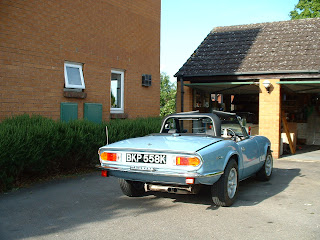