Jobs on the Vitesse

Although OOD looks pretty much together and ready for the road, there is a lot to do to start her up and get driving.
I'm going to list the main jobs as I see them and then go into some detail.
Firstly, it's worth pointing out that this car is in remarkable condition and it's a testament to the builder and the choice of quality parts when it was assembled. I have to admit to being a little in awe of it and that's some of the reason it's taken me so long to get to this point. It's gradually becoming mine as I get to know its secrets.
The main issues I see are:
No 1 - the fuel system. 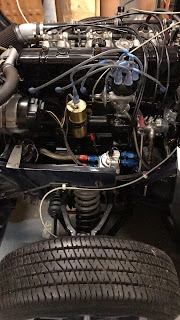 One of my favourite views - Lucas PI in a Vitesse
The fuel system was partially dismantled when I got the car - when she was parked up it was never envisaged that she's be stationary for circa 20 years . As Adam said, life intervened - as it does. So the fuel system solidified in the tank, filters, pump, injectors, etc. Most of this has been cleaned out and the rotted out fuel sender replaced.
The car is a 2 litre with Lucas PI, Bosch pump and diaphragm PRV. The system was build well with new or reconditioned parts - in fact that goes for the rest of the car too really. There are numerous modifications which I'll explain as I come to them, lets just say this isn't a standard Vitesse. 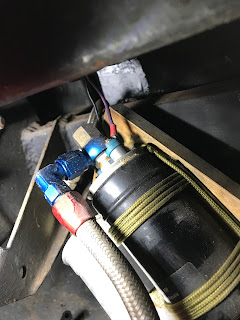 This was the temporary installation - some great rope work with paracord - the pump and filter mounted on a backing piece and slung on the rear outrigger. Age and fuel had eaten the low pressure feed pipe from the tank - I have some new pipe for that. The Aeroquip pipes are all fine, they are pretty indestructible. 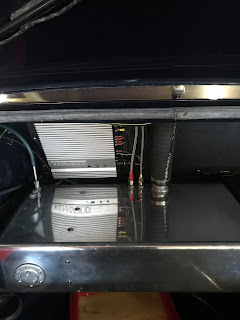 Stainless custom fuel tank, the big heat sink looking thing is an amplified for the in car entertainment system, some of which Adam still has - all in good time. 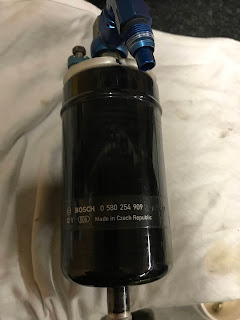 Bosch pump and filter - testing shows it runs but I'm not confident that it'll be OK, I will assume it is until I can test it fully 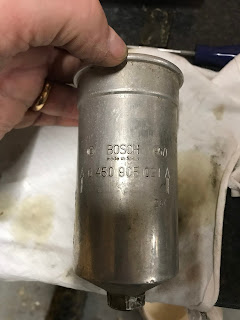 Bosch filter, looks fine but I'll renew before running it, I have a spare in a box somewhere! 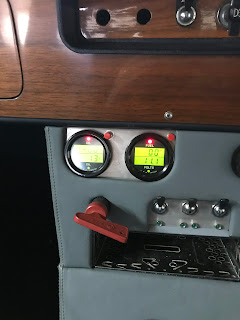 I powered her up (battery, in the boot, was knackered and didn't come with the car, I've since bought a replacement). The gauges are really neat with digital read outs of fuel and oil pressure in one gauge and oil temp and pressure in the other.