It feels like the time is right to resurrect this blog, there's quite a bit going on that might be of interest to fellow Triumphists.

Some of you may know I've been pursuing a rather special Vitesse for a number of years, well I bought it (that was never in doubt) and it's back home with me (that took some doing).

I did write up the story to remind me of the odyssey, so here it is: (fair warning, my memory is a bit hazy on some of these details so do call me out if something doesn't stack up!) 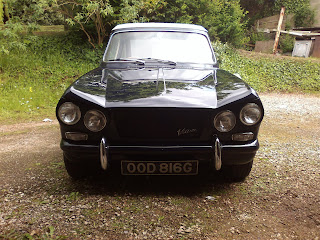 It's been a long time in the brewing, but patience is a virtue – I'm not sure what tenacity is though, maybe a curse? Anyway, I wanted a Vitesse, I found one, it took a while to get it home.

I first knew of this Vitesse sometime on the early naughties, maybe before, when I saw an engine bay picture and thought "that would be good, a PI Vitesse". I then bought a Vitesse, added PI, had my fun and sold it and sort of regretted it. (that's a whole other chapter).

I bought a TR6 and whilst it was a good car, it wasn't as special as a PI Vitesse.

Anyway, back to my PI Vitesse, the Jasmine yellow one that I broke the crank on - I thought it needed better seats so I found some nice leather buckets from a guy called Adam (actually his name is Finn Adam Egland-Jensen) who, it turned out, owned the car in the picture of a PI Vitesse engine bay that I'd used as my inspiration for my Jasmine Vitesse!

In May 2013 I pinged him a note on Facebook Messenger to see if he still had the car and would he ever like to sell it, if so could I have first refusal. I never expected a reply.

He came back to me later that day basically saying that he was open to suggestions.

The car was laid up in 1997 but had been started and run which threw up a few issues including maybe the need for a new cam (it's only done 700 miles on that engine).

Over the course of the next few years we corresponded, Adam designing/making/fixing the things he wanted to get done before releasing the car. He was a serving Naval Officer (still is at the time of posting this) and so prone to spells at sea. The car was in Exeter, Adam in Portsmouth and I in Reading - it was always going to be logistically challenging to get to see it.

In 2016 a plan was hatched to meet him at the car's resting place but it wasn't until August 2018 that I actually got to see it in the flesh – I was hooked. It was a bit of a time warp - but in great condition.

There then followed some interesting discussions around price – which was tricky given that neither of us really knew what state the car would be in when it eventually changed hands. It was never built as an investment, it was Adams car, built by him for him - there's lots we have in common but lots we have differences on. It's not everyone's cup of tea, but I liked it so that's all that mattered really. Anyway, we got there and agreed a spec, a price and that Adam would complete some of the jobs.

There were plans to extend Chinn Towers and in 2019 the East wing was added – an extension that included removing the roof of my garage and re-orientating it, connecting it to the house and generally causing major upheaval. I didn't push Adam for a collection date as I was in no way ready to receive another car.

I started to try and find a car transporter I could hire and even considered getting the car roadworthy down there and driving it back, but that seemed even more complicated. My good friend Carl had moved down to Cornwall and in order to move his car collection down from Basingstoke, had got himself a nice car trailer. I floated the idea and he agreed, it could be done – I'd catch a train down to Exeter, he'd meet me, we'd get the car loaded up and drive up to Reading in time for beer o'clock at my place – what could be easier?

In late 2019 the extension was done, the storage in the garage was more or less sorted – electric winch repurposed into a loft lift is a highlight – as are the fully fitted kitchen units around the garage.

By March 2020 the temporary garage in the garden was gone and I'd even grown a lawn, laid the day that the Covid pandemic lock down started. Moving around the country became tricky but that meant Messenger email traffic increased between Adam and I and we finally got a date in the diary to collect the car.

My mate Tim got wind of the plan and immediately offered to help so the train journey was out and Tim driving was in.

And so it came to pass that on Saturday 24th October 2020 the Vitesse came to it's new home.

Now those of you reading this will realise, that was a year ago! What's been happening since? Well it's been a fun time in amongst Covid, working away from home and trying to balance everything. In that last year by youngest daughter has graduated, moved from Nottingham to London (Dad's removal service) and my eldest daughter has produced Rose, our first Grandchild - yes I am Grandpa Jason. I've also helped move my parents (literally round the corner from their old house who's garden touches their new garden!), I've prepped and sold my youngest's car and kept my pair of his n hers Saabs on the road.

My intention is to post a few photos of the car, update you on what's' been happening (newsflash, not a lot until recently) and try and get the car back on the road.

That's probably enough waffle for now, here's a few photos (I'll be mixing Adam's pics with my own). 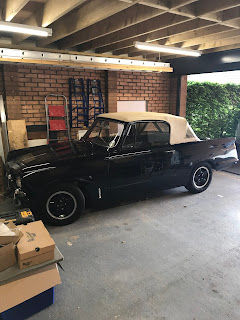 OOD at home in the partially competed garage

Looking forward to carrying on with the completion of this car without being the owner. Ultimately I need to see it finished whilst concentrating on 3 other projects and never getting closer to retirement (have been past 3 original retirement points already)

Looking forward to helping getting this car through to completion. Hampered by 3 other projects and still being stuck in the RN beyond normal retirement point.

Looking forward to helping get this car through to completion. Still busy in the RN with 3 other car projects on the go!

Thanks Adam, couldn't do it without you!