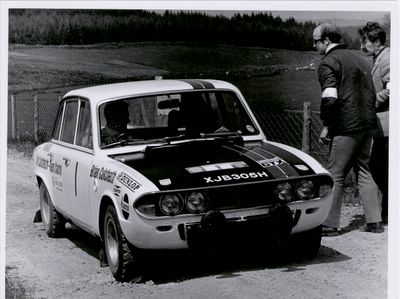 Brian Culcheth in his ex-World Cup Rally car at the start of a stage, somewhere. I'm guessing that, as the car is in Team Castrol colours and has the roof vent blocked off and is clean and tidy that this is early on in the Scottish Rally of 1971. The car had been lightened and tuned - as far as I can tell this was the first time it had competed without the roof vent. In the original photo you can see the plate over the vent.
The car only did three events that year - The Welsh, The Scottish and the Cyprus rallies. I've seen pictures of it on the Welsh and it has the roof vent so as the above certainly ain't Cyprus I'm guessing it's the Scottish June 1971 - it looks like June weather too :-) Culcheth achieved 2nd in class and 10th overall on that outing.
Posted by Jason at 8:42 am