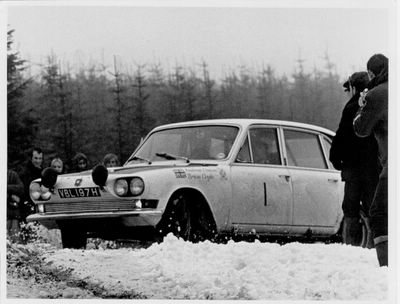 The second batch of photos arrived - this one's interesting as it's a Mk1 and shows clearly the registration and crew names - VBL197H crewed by Andrew Cowan & Brian Coyle. This car appears in Robson's Works Triumph Book but the details in the results table in the back of the book are wrong - Robson says 3 Mk1s entered the RAC Rally of November '69 and that Cowan & Coyle were in VBL195H and won their class. They did win their class but were in VBL197H. Now there are no dates on this photo but as the car only seems to have had one official works outing, the Nov '69 RAC when the car worn car number 1 and it was very snowy, then I;m thinking this was indeed taken on that rally. The text in Robson's book clearly says 195 was Hopkirk's car and so the it's the results table in the back of the book that's screwed.
The story of these Mk1 PI's is that they were one off developement cars for the World Cup Rally of 1970 built out of brand new Mk1 shells as the Mk2 hadn't then been homologated. They were obsolete as soon as they were made but were solely for the purpose of developing the World Cup "Rally Tanks". Cowan won his class in VBL197H and made 11th overall. Not bad for a one off car, straight out of the box!
Posted by Jason at 10:43 am