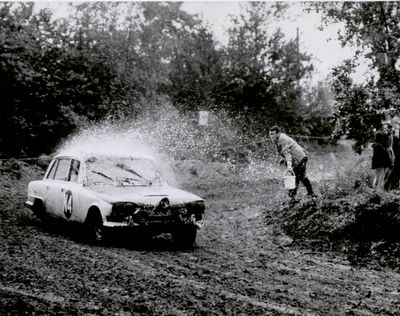 This one has the caption "Roy Fiddler" and the words "Ancient Gorskz Pirate" typed on the back on a label from the Duckhams Photographic Library. No date or other info. Does the bloke with the bucket look like Paddy Hopkirk or what?
I'm intrigued by this shot - I initially though it was an old works car put out to serve it;s remaining days as a rally cross beast - check the bent n/s/f quarter bumper and what looks like broken centre spot light. However, why leave the lights on a rally cross car? But what's that weird "N4" number about? Also, you don't tend to get the front of the car covered in crap on a rally but you would in a close rally cross with other cars in close proximity.
It's got a works colour scheme, that black bonnet and wing top pattern was a bit of a Works trade mark. So when could this have been and which car?
Roy Fiddler drove Works 2000s from '64 to '67.
He used AHP426B, AHP424B, AHP426B and FHP993C and so it isn't really very easy to determine which car or year this is!
Anorak foot note - in 1966 (the year I was born) Roy Fiddler became RAC Rally Champion
Posted by Jason at 7:29 am