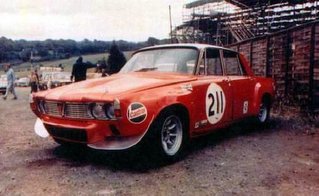 In early 1970 the Abingdon Competitions Dept were developing a Rover P6 racer, the idea was that they'd run a Repco 4.3 litre V8 in a modified P6 shell and compete in the Marathon de la Route at Nurburgring - an 86 hour race. The car was prepared by Bill Shaw and finished off at Abingdon, aparently 1 car was completed to this spec. There were 2 or maybe 3 spare engines bought from Repco. It has to be said this car was a monster :-)
Why am I concerned with this? Well whilst at the Nurburgring the Abingdon closure was announced, the team returned and that was that. Sat in Abingdon were the works World Cup cars, the Marathon de la Route cars, some Repco spare engines and Bobby Buchanan-Michaelson's World Cup 2.5PI. This car had worn race number 1 in the event and had returned in disgrace having run like a dog from the start only to retire in Italy with failed suspension. One of the snippets of info I have is that this car, crewed by ex-Works driver Roy Fidler, had been breaking rear shockers, it turned out that a protection plate on the bottom of the shocker had been attached wrongly and effectively caused the thing to self destruct. The car was described as "privately prepared" by one of the works mechanics - go figure :-) 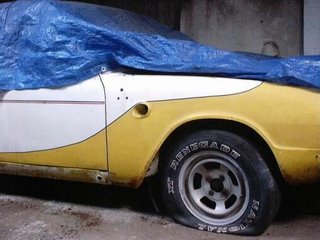 Anyway, back to the theory - fast forward 35 years and Car No 1 is rescued from oblivion by Dave Pearson. The story is that it used to have a drag strip v8 in it - the work done on the car to accomodate this is of an impressive quality. Could it have been the product of the end fo Abingdon? Spare monster V8 engine plus unloved World Cup Car multiplied by cheap disposals of kit by the works = Triumph V8 drag car?

UPDATE - was it Reco or Traco? I've seen both names quoted.
Posted by Jason at 10:20 pm

I own a Rover SD1 that was originally owned and tweaked on behalf of the chap in question, and his name keeps popping up in regard to all kinds of mental old cars and powerboats. Do you know where I can find out more about him?

Pete, you didn't leave your email address so I can't contact you direct, hope you see this reply. Robert "Bobby" Buchanan Michaelson was something of a "playboy" back in the day. He seems to have been a colourful character, even something of a rogue maybe. He dies last year, he was over 80 I think. Very wealthy and very active as a petrol head - he'd done the London to Sydney and wanted to do the World Cup Rally so he organised himself a car and crew. Sadly the effort came to nought when the overloaded car's rear suspension failed on the European leg.
He went on to race offshore powerboats and I think he became president of the offshore powerboat racing governing body. He left a son who is a banker or financier I think. I did try to make contact with the family but it was about the time of his illness and final demise so it seemed a little insensitive to pester them. I will keep trying as I regard Bobby as an interesting character and certainly someone who I'd love to have met and interviewed. I suspect his exploits were wide and varied.
Send me some pictures and details of your car by email (chinn at ntlworld dot com) and share anything you know, we may yet find an "in" to Bobby's world.