Having a bit of a World Cup day

A spark from the Club Triumph forum, a chat with an present owner of one of the cars and an email from an entrant to the event have all rekindled my interest. I've been looking for pictures and details of a couple of cars from the event, the sort of works car BYE377H or "Car No 1" (as it lost it's registration over the last 39 years) and the private "works assisted" entry UKV701H that I always thought was left in South America.
Well the web works in mysterious ways and what does it throw up today but pictures of both cars as well as other info. 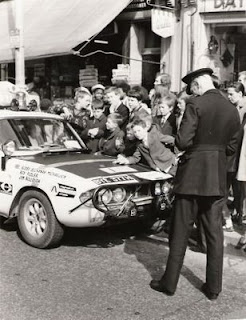 Here's a picture I've seen before but only in poor quality, this one isn't great but it's better. It's Bobby Buchanan-Michelson getting a speeding ticket whilst driving out of London from the start in BYE377H - there are more pictures of this event as it was reported in the newspapers pretty extensively at the time (apparenly, I mean I was 4 at the time!).
Then there was this picture, which again I've seen before. It's of entry number 39, UKV701H, Andrew Lloyd-Hirst, Brian Englefield and I think K Baker. Now this was a car I though was left in S. America after an accident somewhere near Montevideo but it turns out the car was repatriated via a roundabout route. It seems likely it's lost now but anyway, here it is, on full chat