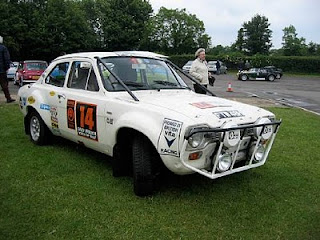 Whilst I was trawling around the interweb I stumbled across this little nugget one of the few (2) surviving ex-Works Escorts/ There was also a privately entered Escort 1300 that survives - I was actually looking for that to see what that sold for! Anyway, back to FTW 48H, car 14 - it's special for a few reasons, firstly it actually finished the event, out of 96 starters only 23 actually made it to Mexico to be classified as finishers.

What surprises me is the price, £71,900 now I'm not saying I've got that sort of money spare but it does seem to represent good value for what seems to be a decent rally car. Of course I don't know my Escorts at all.
The photo I liked the best is the one of FTW 48H leading one of the weirder World Cup entries, an Escort based Elba Motor Caravan - entry 16, a non-finisher. 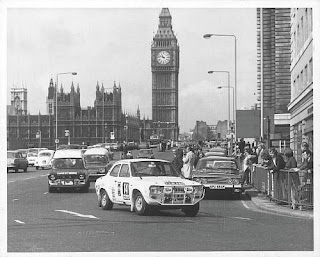 Update - I found it, Doug Harris privately entered World Cup Escort CMF730H is for sale. It's apparently going to be under the hammer at Race Retro this year
1969 Ford Escort MKI

Supplied new to privateer driver Douglas Harris and later owned by the Ford Motor Co, contested both the 1970 and 1974 World Cup Rallies. Finishing 1st-in-class on the former, it retired from the latter somewhere in the Libyan Desert! Since entering the current ownership circa ten years ago, the Escort has been revitalised by Yorkshire Classic Cars and used for historic stage rallying.
Estimate: £25,000 - £30,000.
Shame it's gained bubble arches but then it's a competition car and to be fair, it's been through a hell of a lot! I think it looked better on the World Cup but then I'm biased!
The car had the distinction of being the smallest engined car to finish the rally and it was the last placed finisher. It's also partly responsible for my renewed interest in the whole World Cup Rally - when the rally plate came up for sale many years ago, I bought it for Dave Pearson. At the time he was chasing the sale of the Buchanan-Michaleson car.
Here's the Doug Harris Escort at Wembley 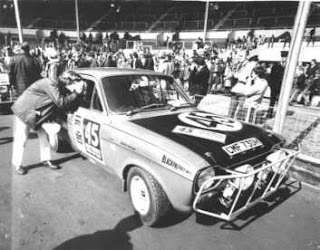 how to sell cars said...

cool cars and its so classic..i love vintage cars and the designs are so cool..it can brings us back in the old times

This is an amazing old school car. Perhaps owning this one will give you the lead among your friends.