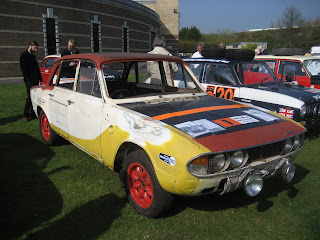 Just a short post to say a big "Thank you" to everyone who attended and supported yesterdays event. I was mainly chained to the auditorium running the slightly dodgy audio visuals (no one saw the join but basically I could not stop the films only pause them as we have no scene search, fast forward or rewind facility). Big thanks to Paul the Gaydon technician guy for getting us that far, in fact big thanks to all the Gaydon staff including John Bishop, fantastic venue and they could not have been more helpful to us.
I didn't leave the site until 6pm on Saturday and was back again for 7am Sunday - I think I was one of the first cars to arrive so the car park was empty. When I was able to venture outside later I was overwhelmed by the numbers, so much so I admit to having a little emotional moment. You've no idea how much sleep I'd lost over this - would the cars come, would the people come, were there enough anoraks to go round?

The inside event went so well we had standing room only for some of the events. I'm so grateful to people like Alan Chatterton and Joe Welling for doing the running around. Alan was especially good at making sure all the speakers were lined up and ready to go. "I don't know what they look like!" he said - "Well I can only tell what they looked like 40 years ago!" I think you did fantastic mate!
Tim Bancroft and Bob King were great, there when they said they'd be, did what they said they'd do and no fuss - thank boys, you did Club Triumph proud.
Thanks for the beer, curry and moral support, not to mention a sofa to sleep on from Dave Pearson - as ever mate, very much appreciated.
Thanks also to Graham Robson for doing such a professional job of keeping the program moving, to time and at the right pace.
I will have forgotten people I should be thanking so a general "Thank you" to everyone again!

Now a plea - I was more or less chained to the inside event and whilst that was great I did not get outside much at all. I did take a camera but I didn't get chance to take many photos - I asked a few of you to take lots of pictures so can you share them with me please? I have an ulterior motive for this. You see there are many World Cup Rally fans around the world who read this blog, some who bought tickets with no intention of attending just to show support (thanks guys) and I said I would try and share as much as possible on-line.

You can get photos to me by emailing me of using my Picas "Drop Box" to upload http://picasaweb.google.com/JRChinn/DropBox?authkey=Gv1sRgCLrh8OOfhaCsnAE&feat=directlink

For those who've asked where they can get the films from, the answer isn't simple. Five for Fiesta is commercially available from Duke for a tenner. The rest are personally owned home movies or were promotional films for which there appears to be no active owner (i.e. the Castrol film was made freely available for distribution by Castrol) so I think we should be OK. The Rob McCauley film is currently not commercially available, he gave permission for it to be shown but as for distribution, I don't know.

OK on that last point, a couple of "plugs" for people trying to make a few quid out of their exploits and who I think we should support. The more worthwhile people like us make these books, the more encouragement we give and the more likely it is that these sources of information are maximised. Show support please to -

I think that just about covers it, I'm now going to start working through the list of jobs I have around the house and at work that I ignored to do WCR40 - it was worth it though :-)
Posted by Jason at 2:01 pm

WCR40. Can not see how to use your dropbox.

Take anything you want from: http://picasaweb.google.com/vitessesteve/WCR40#