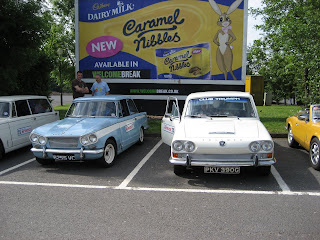 The event was a cracking good laugh, weather was excellent, loads of sunshine not much rain. Memorable parts include my first ever attempt at an autotest (I was crap) plus the Corkscrew which is an insane road click on the link, go to Google Street View mode and you can virtually walk up it. As you can see, it's a bloody tight set of hairpins that are impossibly narrow and steep. It's at times like this you realise just how crazy we are to do these things!

The Autotest at Inverary Castle was interesting, a dusty gravel section proved more visually entertaining than competitive, not that I was trying to put in a good time. I was just trying to do the course properly, failed on that one - "You missed a cone!" said the timekeeper. The truth is, I saw it, I just couldn't get the car round it!
We lost a few people during the weekend, Tim B to a wheel bearing failure, seems they were fitted too tightly and we didn't catch the issue in time before the nearside was wrecked. We tried a rebuild at the roadside just overlooking the submarine base. As if that wasn't enough we also lost Joe and Frank Welling on the route home, just south of Shap when a wheel bearing on his Vitesse exploded in the fast lane, Franks's laundry bill went up but the car made it to safety on the hard shoulder.
Epic performance of the weekend ,ust go to Dave Langrick who finished a chassis change on his 6 pot Spitfire then drove solo from Nottingham to Stirling to meet us. Dave stuck with it for the rest of the event and drove home with Dave and I - top down in the torrential rain and sunshine. What a mentalist!
Issues on my car - fast indicators, crap brake lights, persistent misfire and the ever present brake judder - I loved the weekend.
We did about 22.5 MPG which for the type of driving and the state of the car wasn't so bad - the Vitesse did 19 on the same event 2 years ago and the same on the Ten Countries so 22.5 is an improvement!
I haven't yet had a proper look at the issues, I arrived home at 21:30 on Monday, went to bed and was on a plane to Dublin the next morning for work. Yesterday was my Birthday and today I've been catching up on RBRR stuff. I might get a looksee later.
Check out the last 15 minutes of BBC Scotland's TV programme "Landward" episode 10
BBC - BBC Two Programmes - Landward, 2010/2011, Episode 10
There's also a write up from the organising club, the Caledonian Classic & Historic Motorsport Club here
Posted by Jason at 11:56 am