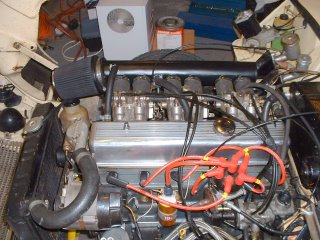 OK so it's not ideal but it's better than nowt - a cheapo K&N off eBay (just to see if it'll work) plonked onto the plenum - yes it clears the inner wing but it fouls the bonnet top - angle it down a bit and it fits BUT it's not in the right place. I think reposition the expansion bottle and some 80mm tubing should allow me to put it right in the cold air flow at the front.
I've been told that there is a soil pipe made at 80mm but I can't seem to find any in the local DIY shops, I've been told Jewson may have some so I'll try there in the week. I've got some travelling to do next week so I may stumble across one, will throw a spare plenum in the boot of the Eurobox just in case :-)
I have a neighbour who is a plumber, wonder if he has anything in his van - right, I'm off on the scrounge!
Posted by Jason at 9:34 am