Bought myself a vacuum gauge off eBay for a tenner - we'll see just how much this engine sucks and how well it stacks up to the factory figures. You see a PI relies on good vacuum to adjust the fule delivery - something I am now accutely aware of following Guru Pearson's wise teachings. (James, where's that photo??)
Playing with the metering unit today I found the right feeler gauge to insert between the datum and the roller by trial and error - it's a metric feeler with "20" on it so I'm guessing .2 of a millimeter? That converts to 0.007874 of an inch which bears little resmblence to the "couple of thou" comments from the Guru - I hope I've done it right!
I ran the car for a while with the feeler gauge inserted, a bit of gaffer tape could have held it in ofr a drive around but I decided that it seemed so much better that it's was there or there abouts. Any bigger and the engine died, any smaller and the effect was negligable.
So I set the engine at TDC, took the metering unit of the distributor drive and carefully put a mark on the rotor so that if I did move it accidentally at least I could get it back to where it was meant to be!
I also replaced those suspect banjo bolts whilst the MU was out of the car, impossible to do with it situ. 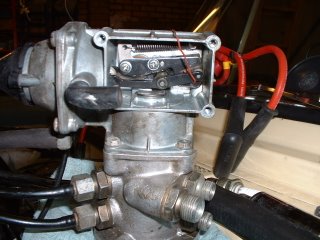 The feeler gauge was cut and stuck with Araldite rapid, I left it a good 20 mins before reassembly and reconnection. All went well and she fired up quite easily after that - a little coughing and spluttering whist the air cleared from the fuel lines but sounded fine. I had changed all the plugs for some new ones I had "in stock" so I'll take the car out for a thrash and see what the effects are - will the plugs be black??
Here's a photo if the modification, the red wire is just holding the rollers hard back against the datum point so I could get in there with the cut feeler gauge and the araldite. Click on the photo to get it full size and you can clearly see the piece of feeler gauge :-)
Posted by Jason at 10:34 am