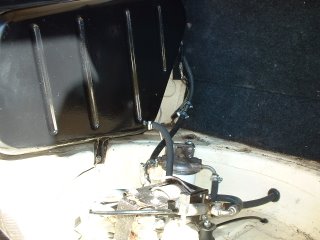 Here's my welding all tidied up and painted. I used a 3/8 barbed hose end - apparently called a "life saver" by the hydraulics place I got it from, no idea why! I welded it to the tank using my Mig and then silver soldered it to make sure itt was fluid tight - I tested it with water and it weeped, only a tiny bit but a miss as as good as a mile here so I tried again and it leaked again, worse! So, I went in search of something I could use to ensure it was 100% fuel safe. I found a two part epoxy repair putty that was very fluid, flowexed well and hardened in only 10 mins. It was specifically recommended for unleaded fuel and seemed a better bet than just plain Araldite which was my intuitive response. So I mixed some up, worked it in and left it to set. A quick test showed it was water proof, I put a little air pressure in the tank too and it was fine. So I emptied the tank, dried it out as best I could and refitted it all. I took the opportunity to replace all the fuel pipes with new Aeroquip pipe of 3/8 bore - I had an off cut from making the main fuel line - just enough to do the job but no spare to make a neater job. I put a gallon of petrol in and ran the pump - lovely! No drips, leaks or damp patches on the tank, one hose needed pinching up. The Aeroquip hose is very tough stuff and the jubilee clips really need to be at the edge of their spec to hold it tight - I could replace it all with proper threaded fittings but at that's for another day I think.
The car fired up fist time - I'm still getting used to the PI starting regime, it's not like a carb engine at all. She ran with little fuss so I left it at that - I put a couple more gallons of petrol in and that was Satuday's work done. I'll take it for a run and fill it up sometime in the week.
Next job for Sunday was to put some relays in the headlights and some uprated bulbs.
Posted by Jason at 7:38 am