Trouble with my horn, I think it's an age thing

Connect both and they don't work. Trace the circuit and it all seems OK - horn push and "pencil" work, connections are OK. Unplug one connection on a horn and the other works fine, unplug two connection and nothing work. Swap the horns around, same thing. Power up the horns independently with some wire from the battery and they work OK. WTF is going on?

Replaced my steering coupling with a Canley Classics "uprated" one - in fact it's a 2000 UJ type version. The old one was sloppy, the new one is tight and big! New one on the left below. The old one was a recent replacement not a Stanpart one - they don't last! 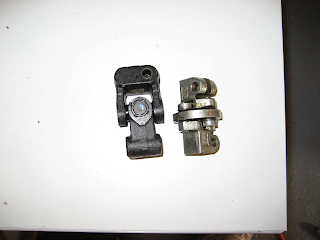 The new one took some fitting, it's much longer than the original and generally beefier - I fitted it and the bolts I used obviously fouled. I took it off and cut the bolts down, it fitted BUT caught on the suspension turret - I cut the bolt down a little more, took a smidgen of the face of the nut and smidgen off the faces of the coupling - it fitted great! What a bitch of a job!

The coupling is often sold as an uprated Herald item, it is in fact a standard Triumph 2000/2500 non-PAS coupling - part number 145377 and available from Canley's for £22.50 or Rarebits for £25 - they appear slightly different - the Canley one is cast, the Rarebits pressed but they do the same job. The added bonus of using this type of coupling is that you don't need a separate earth strap so your horns should work without one.

My horns still didn't work - I left them.

Had a look at my new headlights and fitted them all up with the new blue 100 watt main and 90 watt dip "cobalt blue" lamps :-) Lovely! The left hand inner was a pig to fit, the seating ring where the reflector locates with it's three lugs was wrong - it just would not seat. The three slots were not the same as the other slots in the other headlamp bowls - bizarre. I pulled a couple of spares from my collection and they were OK, the reflectors fitted fine. I cut a new slot and made the reflector fit! Job done and they look good too - will have to take it out for a night driving test now.

After three "trial" fittings of the steering coupling I was a bit fed up but at least that job's done. I never did get round to the wheel bearings - next weekend!

My co-driver Joe turned up for a chat and to see the car, he's definitely up for the run and looking forward to it. I just need to sort out the insurance for him, it's all agreed in principle with Footman James so I'll ping them an email and get it done tomorrow.

Unfortunately neither of us can make the driver's briefings so I'll have to pink Ellis an email and get some T shirts ordered and a copy of the route so I can plot it on my holidays :-)
Posted by Jason at 9:07 pm

re horns
either the earth is not good enough or insufficient current reaches the horns. Check the connections on the purple/black wire that goes back to the steering. As the horns both work when you connect them direct to power simplest solution would be to add in a new wire to take power to the horns.