Where have all the Mk1 Rally cars gone? Oooo - there' s one!

I've been running up and down to Newcastle recently, the location is closing and I'm the guy doing the work and people movements out. Something of a bitter sweet job as the people are great, have done everything I've asked of them yet they are still out. The good thing is that most of them are into new jobs and we have a big party next week :-)

Anyway, Mk1 rally cars - I love 'em, they are so superficially similar to production cars yet so different when you start to look. I've got loads of period photos and will always look for more but there's nothing quite like the real thing. So when I was passing Canley's yesterday on the way home from Newcastle I was well pleased to see that Bill Bradleys' Mk1 FHP993C was in the workshop for a bit of a fettle. Dave did a lot of work on the car when Bill originally acquired it and this has stood the test of time well. It's got a bit of patina about it and isn't concourse perfect (no rally car should be perfect!) but it is a thing of beauty and so very correct in the finest detail.
I crawled all over it and took loads of pictures, they're all here, crap photos and all.

I just love the way it's all trimmed, carpets and headlining etc. There are no back seats as you would normally recognise just a flat base and back trimmed to look like seats - I guess you could sit on it but it would be most uncomfortable! In use it would have had two spare wheels strapped behind the front seats.

This is a PI equipped full works rally car, with all the knobs and whistles of the era - aircraft instruments and weird switches in strange places - I love it! 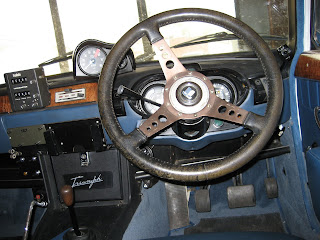 I hope you can see the special altitude compensating metering unit in the engine bay shots - a real rarity! I'd love to find one :-)

Anyway, take a look at the album, they are all the photos I took.

Just found this old advert from 1984. 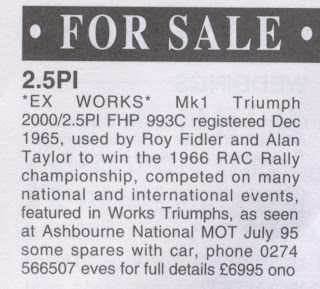 Hope you can read the next one.

Jase, I noticed that on that advert it was a Bradford phone number. I doubt I would know the person who placed the ad but interesting nonetheless.

I've got a copy of an article from the same publication that explains a little aboutthe car, I'll try and put it up - the seller was "K Shipley"