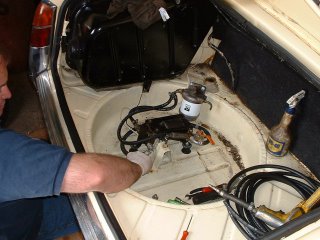 With the wiring sorted Dave then went about building up a decent pump from the 10 or so I brought up - I need to sort out a cooling coil for it sometime.
I stuck with Lucas, I like the idea of refurbishing them, they are simple in design and can be fiddled with. This one is quite and will pump in excess of 160 psi - that tested our joints as it transpired our PRV was FUBAR! None leaked :-)
The pump's mounted as low as possible in the spare wheel well, I'll be running without a spare I think. I'll just get a can of tyre weld jizz - shame as I had bought a matching Minilite spare (ebay again).
Using a saloon pump cradle Dave bolted up the pump and PRV, deleved into his stock and found a MKI PI pipe to connect them, nice and long to prevent cavitation. The filter was mounted (I'll change it's position to try and get a cover on the spare wheel well) and the whole lot plumbed in in TR5 style - that's with the spill from the PRV routed back into the "spare" union on the filter housing. We used a "T" piece in the original Vitesse fuel line from the tank to accept the spill return from the metering unit (this runs at low pressure so uses the original fuel pipe). All this means we've retained the original single outlet from the standard tank - I think I'm still going to do the twin tanks, just not right now.
The "T" piece we used is a little restrictive so I think I'll change that soon - having said that I haven't noticed any fuel starvation issues. Dave says we should try cutting a hole in the tank and welling a sump/swirl pot into the bottom of the tank to prevent fuel surge. I like that idea, in the meantime I'll keep the tank full!