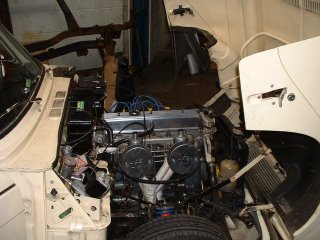 ... at the carbs. To be honest I've never had any real complaints about the carbs, they were rebuilt just before I got the car, have been on the rolling road and set up nicely. The throttle linkage was sweet and much better that the one on the Sixfire. My only complaint is fuel consumption, the car struggles into double figures but then it gets used hard.
I'm undecided as to whether to keep them for spares for the Sixfre or dispose of them and their K&N filters. As there's other expenditure coming I think I'll try and get rid. There's also a Malpasso Filter King thingy and a Facet fuel pump to offload.