Which throttle bodies to use? 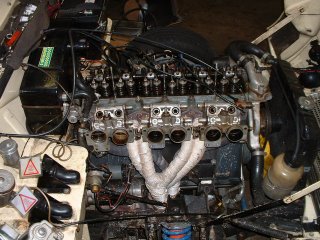 Back to the engine and the choice of manifolds. I have both early single balance pipe type and the later twin balance pipe type. Now the general concensus is that the early ones are the ones to have but they have thinner throttle spindles that wear quickly, with their single balance pipes they are less likely to suffer from air leaks.The idea would be early bodies machined to accept late spindles but we had neither the time nor the inclinatin to do this and I don't think I'll be bothering, they twin balane pipe ones are fine.
I cleaned them up in the tank, careful not to over clean - the butterflies in a PI need to seat fully, tickover is achieved when air passes through the air bleed valve, not through the butterflies so you really want a tight seal here to be effective - it's very unlike a carb here. You don't adjust tickover with the throttle stops you do it with the air bleed screw.