Fancy oil for my fancy gearbox 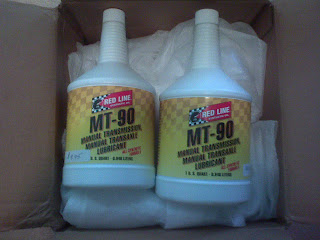 Having done some research on what gearbox oil to use in my hybrid Vitesse, GT6, TR7, Dolomite box I came to the conclusion that Red Line Oil's MT90 was the stuff to have. I went looking for it in the UK and could only find it mail order for about £15.00 a bottle. I was chatting to my mate Jerry who lives in Wisconsin. He said he'd ask his neighbour who builds race engines and see if he recommended it. Jerry then called me to say he'd posted me a couple of bottles - that's what friends are for, postal smuggling :-)
Anyway , that was ages ago, back on the 16th March - we both thought it had gone astray or been intercepted by the customes - it was marked as a gift of maple syrup! Well anyway it turned up on my doorstep today having got here via Schiphol in the Netherlands. It was all intact just well travelled.
I'm going to go and put this on the work bench in front of the car to tease it. The car's not getting this until it starts to behave again!
Posted by Jason at 2:18 pm