You know how it is, your car breaks down, you come home on a flat bed, you are hacked off and you put it in the garage in disgust. A week or so later you go back to it and start sorting out the issues. So it was today woth the Vitesse, we'd come back from the Isle of Wight on a flat bed. I've oredered a new metering unit and am waiting for Gareth Thomas to come over and fit it and also give the car a tune up before I take it to Scotlandshire for La Carerra Caledonia in June. Walking into the garage last night the smell of petrol was over powering, really strong and pungent. I knew it would smell of fuel as there was a leak at the metering unit but that was only when running, there should be nothing there following so long just standing. There wasn't anything under the bonnet so back to the rear of the car - there is was, a nice puddle of fuel!
Investigation revealed that it was coming from the area around where I had welded in a new union.
I suspected my welding and so I drained the tank - pain the butt that is when it was nearly full and I took the tank out.
My welding was fine, the problem was historic - a previous owner's repair to some corrosion around the drain plug had failed. It was covered in some sort of filler then tape, sticky, gooey, horrible tape that was starting to break up with the petrol - nasty!
Never mind, I cleaned it all off to reveal the corrosion and had a go at it with a wire brush on my die grinder - came up pretty good and get the rust off to reveal the hole. 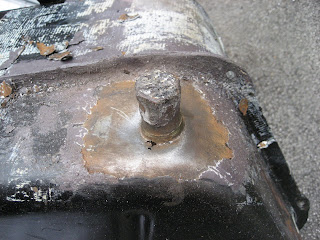 I don't have a spare tank so in order to get it back together I mixed up some epoxy tank sealer to do a temp repair - it could be permanent but I'm going to replace the tank with something a little larger and more solid. I have in mind a TR6 tank - it might fit and it will have the internal swirl pot and plumbing fittings for the injection - ideal! IF I can find one at the right price and if it fits.

In the meantime, I've bodged the old tank :-) It is petrol tight and went back in OK - I've left the drain plug grommet out so I can see at a glance if it does leak again. The epoxy sealer is pretty good stuff and I doubt it will fail there again but teh rest of teh tank floor wasn't great. It's definately time to replace it.

Whilst the tank was out I created a template for a bespoke tank to see just what it could look like, I can then get an idea of cost to get one made. I've always felt there's a lot of wasted space in the Herald/Vitesse boot and a bespoke tank would give me the opportunity to fix that. I have in mind something going across the back of the hood well and extening into the wings - see pictures. It can be slim and wide but will need to be baffled to prevent surge and have a swirl pot inside. This will also give me the opportunity to mount the pump better and regain my space wheel well - and therefore put a proper boot floor in!
I think I can simplify the construction so the "ears" at each side are not so complicated 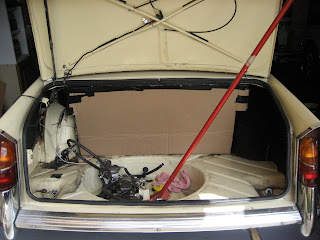 It needs to be a little shorter too so I can get it in easier - wonder what it would cost to make up?
Posted by Jason at 11:36 am