After the Vitesse's inauspicious last outing I got serious about the PI and specifically the metering unit. Having been chatting to Gareth Thomas over the last year I ordered a recalibrated MU from him. He did a lot of development work on fuel curves especially for the 2 litre PI application. 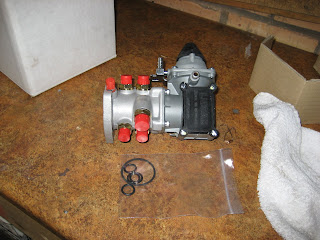 Gareth said he was coming to the UK soon andwould be happy to come take a look at the car and have a twiddle with the injection.
This sounds easy but consider that Gareth lives in Estonia and you start to get some idea of the logistics involved. Well it all came together yesterday and today, Gareth flew in from Tallin and I collected him from Hounslow. We got stuck in straight away and stripped out the old MU and fixed my mis-aligned dizzy drive. That allowed us to get the distributor looking right once the metering unit was installed and timed up correctly. Gareth adjusted the ignition timing and she sounded pretty good but not quite there yet.
We took it for a quick spin - now that was better.
It was getting late and it was time to call it a day and have a bite to eat and a bottle of wine or two.
I'd offered to put him up for the night so we had a good chat over dinner and started again fresh this morning.
One of the issues Gareth found was that there is some wear on the forward throttle spindle and that was making it quite hard to get the balance right. There was also insufficient tension on the throttle return so the butterflies were not returning to the closed position as well as they should. Attaching springs of different tensions and in different places, removing others and we were there - it wasn't pretty but I can sort that out later.
Gareth eventually got to reasonable balance, not perfect but pretty damn close. The tickover is now much lower and smoother.
We then took it out for another spin, it was much better, very smooth and eager to rev. Time for a longer blat - down the roman road at an indicated 100 - yup the Monster was back with vengeance. She pulls hard through the rev range and just keeps going - it's still a new engine so although I'm quite happy to rev it I'm going to use it sparringly until the memory of the broken crank has faded!
A little pinking needed attention but otherwise it was pretty damn good.
Back to the gargage for a little more twiddling and to put the vac gauge back on - would you believe it was reading 7.5 - bang on! All my worrying and farting around about vac readings - get the valve clearances uniform, the butterflies synchronised and the timing right and the vac will be right :-) I learnt a lot today - it's the little things that make the big difference - OK so a fresh new metering unit is good too :-)
Posted by Jason at 8:26 pm