This fuel tank has been repaired more times than Trigger's broom. It was still leaking despite my attempts at repair - yup it was leaking again so I drained it again, took it out again, cleaned it up again and a great big slab of tank repair came off to reveal not one, not two but three holes in it! 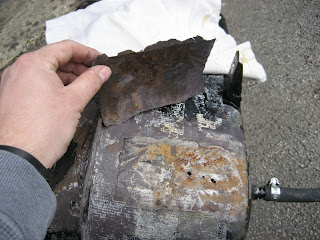 So, I've bodged it up again to get me through the next week, I just hope it holds!

The next puzzle is this rubbing sound from under the car, something is grating on the prop I think. I had convinced myself that it was the U bolt for the exhaust but it's no where near the prop. I could see a very slight witness mark on the prop, just a bruise on the paint, not even chipped. Could that be it? It's down by the handbrake but it's not that - it looks like it could have been touching the chassis but not now. So I've put some tape over the witness mark and I'll go for a spin tomorrow then see if it's touched again. It's all good fun isn't it!