Stoneleigh, the power of the Blog and the engine post mortem saga

Stoneleigh show was good, I spent the day helping out Dave Pearson on the Canley Classics stand, the stand that almost wasn't. You see Dave didn't book and tables and didn't bring any either so guess what? Yup, there were none available when he arrived with the van full of stock. A panic trip back to the workshop for Dave then ensured, I thought he was going to weld up a few Triumph wings and make some but he just threw everything off the shelves in the shop and brought those.
Meanwhile, my daughter spotted a guy loading up some tables back into his van so I went over and blagged them :-) We had a stand at last and, with the addition of a table made out of two cardboard boxes and piece of chipboard, were in business.
With such a dodgy start to the day I felt sure Dave would soil himself again with a bacon and egg roll - as he has done so many times in the past. But no!! He actually managed to eat it "clean" - our luck had turned :-)
The show went well, chatted to lots of people, sold a few things, saw a few cars. One thing that surprised me was the reaction I got when I cheerily said "Alright?" to an old friend - "No" was the answer and there then followed an uncomfortable exchange about the strip down of the engine with the broken crank. I shall not name names because, and I want to spell this out, I'm not trying to have a go at anyone, nor lay any blame for what happened. I post things up on my Blog because I like writing them, people like reading them and it's interesting. I'm happy with the situation, I have had a little misfortune and I'm dealing with it - shit happens and you deal with it.
So when I was told that the details of my engine strip down were "bullshit" and the guy refused to listen I walked away - I took photos as I stripped it down, I was careful to note what was where and how it came out. I laid out all the pieces as they came out. It is always possible that component s got mixed up but I cannot see how - I am careful but not perfect.
So here are a few photos of the strip down and I'll show you exactly what I mean. 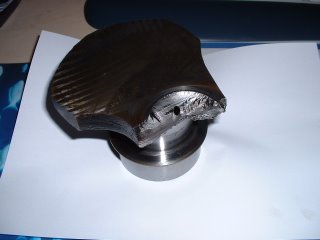 So here's the first fact - the crank was broken. You can see where, I think it's self explanatory - it shouldn't look like this but it does! 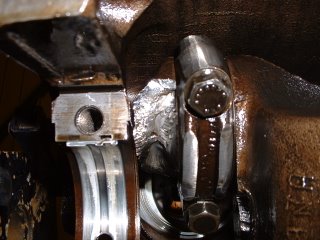 and here's the other end of the crank, still broken, I think it fair to say that this is not bullshit. 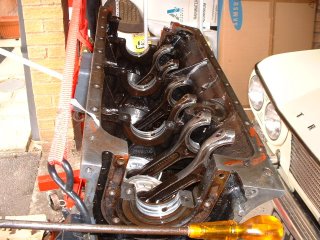 The engine partially stripped. Here you can see the rods in situ complete with their rough lightening, done with an angle grinder I suspect, although that's my opinion, make up your own mind. These were done by Jigsaw's contractor, I have the bill from the documents that came with the car. I'll check through the photos as I go but I think you can see grinder marks on the big end bolts on some of the rods. More on those bolts later. The rods went in the scrap bin. 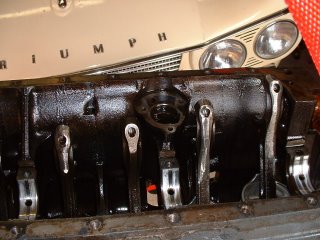 A better shot of those rods - you can clearly see the roughness of the balancing marks. 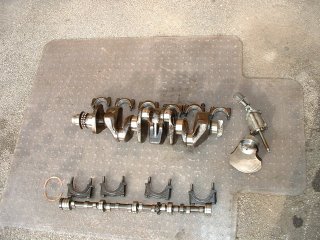 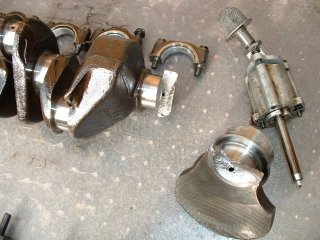 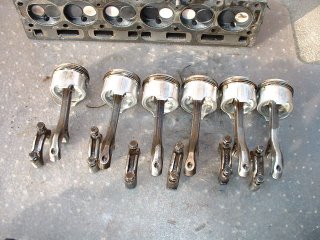 Here you go, I knew there was a better photo in there - look at the big end bolts, there are different head markings on them - they are not all the same - these are how they came out of the engine. Look at the one on the right, it's got some grinding marks on it from the balancing process.
Also in this picture you can see the combustion chambers - look at the one on the left, No6 - compare it to the others - the piston has touched the head and cleaned it to a shiny surface, not black like the rest 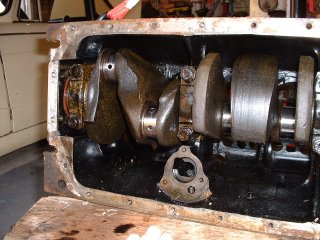 This was a shot taken before the main bearing caps were removed - I thought it might show more but I can't see anything obvious here. I include it for the sake of completeness.

I haven't taken any proper photos of the stretched big end bolts, the soft aluminum spring caps, the worn Mk1 rocker gear or the peened over valve stems that won't fit into new valve guides so I will when I can figure out how to get the macro facility on my new camera. I've got some spare rockers that I can cannibalize to make up a new set - these are Mk2 ones but I'm note sure what state the shaft is in.

What are my motives for doing this Blog posting? Well I asked myself the same question - you see I'm perfectly happy with the car, I'm perfectly happy with what I bought and I'm not bitter or resentful of the failure of the crank. I'm interested in all the little bits and bobs of what went wrong, why it happened and how I can avoid it in the future. I wasn't thrashing the nuts off the car, I don't over-rev it, you can't really unless you try and break it! I've never topped it out, you get to 110 mph (GPS measured speed, that's about an indicated 125 mph on the speedo) and the front end lifts and goes waffly, I run out of talent before then.
Anyway, back to the engine, people make mistakes, I don't think I made one buying the car, I hope people can see that. My motive is I like the truth and I don't like anyone to think I'm colouring that truth (for what ends I don't know). I am not after compensation, apology, help, in fact I'm not after anything but acknowledgement of the facts and adult discussion. If my experience helps someone out then great - in fact that's what I love about this Blog, the people who tell me they enjoy reading it and get something out of it, help, advice, ideas.
The guy who wasn't "alright" will remain nameless and so will the other names around this - it's not about personal attacks, I'm not into that. About a year ago I made him an offer to drive the car when I'd got the injection sorted and the thing was generally shaken down, that offer still stands. I'm a nice guy, I don't fall out with people over opinions - we all have our own, it's what makes us interesting. The facts are there to be seen, debate them and offer opinions but don't deny them, turn your head away and refuse to acknowledge them or offer any alternative.
I counted him as a friend and I still do.
Posted by Jason at 10:50 am