A very productive couple of days

I'll write this up properly as soon as I have the time but here's a quick taster of what I've been up to.

Brian Englefield, one of the privateers on the World Cup appeared on the Atlas forum I occasionally use, then popped up on the CT forum to set a few things right. I started corresponding with him and he invited me to go see him and his "box of World Cup stuff" - was I excited? Damn right I was!

The unique things about Brian Englefield is that not only did he complete in a Triumph but he also bought 2 of the World Cup cars from the works, including the wreck of XJB304H which is now in the hands of Pat Walker. Now there has been some chat about the provenance of this car although having seen BYE377H the Buchanan-Michaelson car and WRX902H the test car, I now know exactly what would be needed to replicate a works shell and how difficult it would be to do now. So it was a great opportunity to speak to the guy who reshelled 404 and see just what was done.
So I gathered up Dave Pearson who owns DYE and has WRX in the workshop and is a fellow anorak. He's a damn sight more knowledgeable on the technical details than I am too!

Now Brian lives in Normandy, an 800 mile round trip for me, add a couple of hundred on that for Dave but what the hell! It's an opportunity to speak with someone who was there, hand his hands in a works engine and drove, broke, fixed the cars!

Because I am off to India for 3 weeks and weekends are precious for Dave we figured out that there was really only a couple of days that were viable to go, Brian would put us up and so at stupid o'clock on the 12th we were off for Dover.

We weren't disappointed, Brian and Jeanette were excellent hosts, Brian's memory, despite his apologies, is excellent and his "box of memories" is more World Cup stuff than I've ever seen before. Add to that the post World Cup stuff and you've got a gold mine. We enjoyed a great evening and morning which passed far too quickly before we had to get back for the ferry.

Here's a couple of pictures of XJB304H, as reshelled by Brian and competing the same year as the World Cup - as he said, it was an easy job to build up the shell evidenced by the following a matter of months after he bought the cars

and in colour, after christening the new car with a minor contact with the scenery

We came away with a hundred scanned documents a couple of photos and a book of notes. I have to decide what to do with them all now!

The first thing I want to do is to make a hit list of people to talk to and near the top of the list today is the Abingdon test driver, Fast Eddie Burnell - where are you Eddie? Also, Brian is going to contact his navigator and see if we can make contact.
Posted by Jason at 9:09 am 2 comments:

I've been playing with Google Maps to see if I could plot the rally route, I didn't quite manage what I wanted to do but I have managed to plot all the major aiming points, well those I could find! I wanted to try and link them up with the likely roads but I couldn't seem to make it work without a lot of work.

Ultimately, if I can, I'd like to tag the photos I have with the places they were taken, once I've verified them!

The maps are reproduced below, I think this should link you to them too

If you're viewing this from within the Club Triumph site then you may not be able to see the embedded Google map, click here to go to my Blog http://chinn.blogspot.com/
Posted by Jason at 8:56 pm No comments:

Trawling for photos, I stumbled across what I think is Dave Pearson pootling about on a sedate drive around Chatsworth in 2008, I say "I think" because I'm not sure if anyone else drove 5B that day - Dave, help me out with a comment mate.

Click on each of the images to be taken to the owners pages and the image source with some bigger versions.

Here he is again 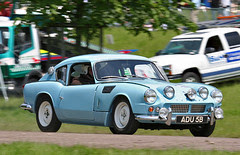 Just mooching around the net for some info and found this phot I've not seen before. All three surviving works Triumphs are in there. Click on the image for a slightly bigger version hosted on Paul Lowry's pages. I've written to him, I wonder if he has anymore?

Additional - I have now got the original image and it's a scanned negative at excellent resolution so I've uploaded it to my Picasa album here.