There's a PDF version of the Triumph parts book for the TR6 that I could download now? I'll buy one at the next show I go to but I am away from home and need to check some parts, their orientation on the car and their numbers.

By way of a quick update, I'll be collecting the "new" TR6 on Thursday having just had the unpleasant experience of paying for road tax :-(. That's the first time I've had to do that on a Triumph, not nice.
The car is looking very yellow at the moment fresh out of the paint shop and needing it's external trim refitting but I hope to share some photos soon, unless I can figure out how this iPad app works! 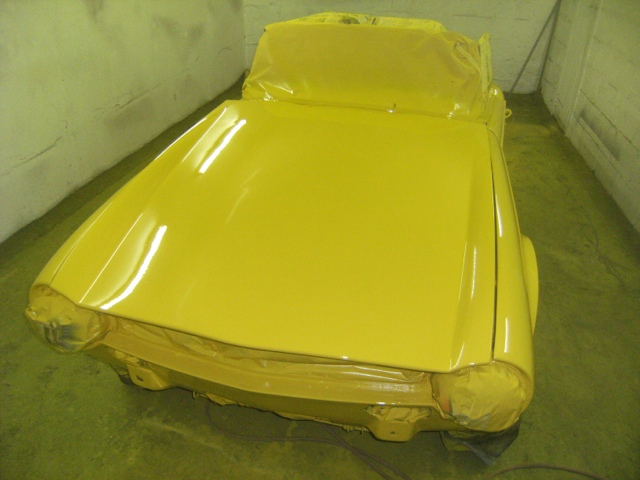 A bit of a clear out

Does anyone need some Mk1 Stag seats to practice rebuilding on? I've had a pair in the shed for as long as I can remember and it's time to move them on or throw them away. Currently on eBay for no reserve at a 99p starting price. I must admit that since eBay changed all their listing categories I am baffled, whilst there's a category for complete interiors and one for seat belts, there is no category for seat! Anyway, they are listed as item number 251114390110 - http://www.ebay.co.uk/itm/Triumph-Stag-Front-Seats-Mk1-/251114390110?pt=UK_CarsParts_Vehicles_CarParts_SM&hash=item3a7795825e#ht_500wt_1413
Please help me out and take them away, then I can fill the space with new crap! More previously enjoyed Triumph parts will be listed as soon as I can get to grips with this new category system!
Posted by Jason at 8:44 am No comments: 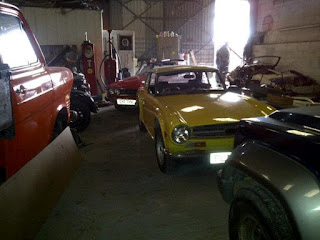 Well not really but it does kind of feel like it seeing as I am no spring chicken anymore.

So, 2.5PI saloon sold and I've bought a TR6. I went over to the workshop where it's stored today and did the final deal. I am going to have a few paintwork issues that the car picked up in storage corrected by the resident painter there and then pick it up in a couple of weeks. That'll give me time to get the documents in my name and tax it whilst gathering the parts to rebuild the seats and possibly a light refresh of the interior trim.

It's not tax free and it's not Sapphire blue, two of the things I set out to get when I started looking but it was a good price and it is sound. Mimosa yellow has always been a favourite of mine but this is the first yellow car I've owned, I wonder how I will get on living with it? The engine has had some performance work done including a gas flowed head, a full lighten and balance of the rotating parts and the addition of "stress relieved" rods - I think that means they were shot peened. It seems to drive well, gearbox and over drive operation are slick and all in all I think it was well worth the money. There's some work to be done to it before I collect it including a little tweak to the door fit and painting the back panel the correct satin black, I hope to collect it in about a fortnight.

The car has a fresh MOT and needed very little to get one despite being stored and unused for quite some time. The owner has only lived in the UK for 2 years out of the past 20 so the car hasn't seen much action. He had owned it for a total of 27 years but has now left the UK permanently for Australia.

On the do list already are
There will doubtless be more to add to the list and I am being picky as I do like my cars to be in good order. The trouble with a TR is that you can get almost everything shiny and new, at a price!

If anyone reading this has any of the above for sale or wants to buy any of the bits I am going to take off (roll over bar, steering wheel) then give me a shout.
Posted by Jason at 4:22 pm No comments:

Time for a change

Well it's happened at last, I have waved goodbye to saloon ownership and am actually "without Triumph" at the moment. I am on the trail of a TR6 that was restored 20 years ago but has done very little since, like the saloon, the TR owner has emigrated - sounds familiar? It a long story how all this came about but in a nutshell I was thinking of selling the saloon and getting a TR6 as I wanted to return to convertible motoring. My wife has never really liked the PI, so much so that I thin she's only been in it once or twice. We had a heart to heart and basically she misses the Gitfire! We're also at that stage where the kids are growing up and out so having 2 seats isn't the show stopper it used to be. So on the Isle of Wight, same as every year, Ashley Mills comes over for a chat and, same as every year, he asks me to give him first refusal if I ever want to sell the saloon. Now I had entered the International Auto Ecosse and the RBRR so zeal was done where I would part with the car after the Auto Ecosse, provided I didn't bend it. I'm pleased to say the the car did well on the event, about 1500 miles done with a couple of hiccups. Nothing terminal and both fixed properly with real parts, not duct tape and string bodges! Ashley has been a busy chap and although he paid up for the car straight away he wasn't able to collect it until today, which was great because if I get this TR soon and my daughter comes home with her car and my parents go back to Cyprus and leave me there car I will be awash with cars!! So congrats to Ash, look after the old girl and give her a sound spanking every now and again. So what of the replacement? Well it's a cheap TR6 as I just couldn't bring myself to spend ten grand - OK so Mrs C wouldn't let me spend it but I did convince her to put a few quid to the proceeds of the saloon sale. We went and saw quite a few TRs, some were just OK, some were downright awful and one was pretty much just right. Buying a car from an absentee owner on the other side of the world is quite tricky, you need patience and understanding then some more patience. Suffice to say that the deal is not yet done and I still need to pay a deposit but I'm getting there, I hope. This will be my RBRR car so I hope I can get my hands on it soon and start the recommissioning process, time is awaisting.
Posted by Jason at 8:04 pm No comments: