This week I have been mining my garage for treasures!

A lifetime of Triumph ownership has left me with a load of odds and ends in the garage, some of which I really can't see me needing anytime soon. None of it is especially desirable or rare, in fact there's a strong desire to bin some of it but I just can't bring myself to without trying to move it on to some other needy owner. There's new repro stuff never got round to fitting and lots of secondhand bits that need to sell on. I'll eBay is over the next few weeks but if anyone wants some of this then shout now. From today's ferkulling I've found the following
There's more and I'll take some photos but if anyone reading this is looking for something for a Herald/Vitesse maybe some Spitfire stuff - let me know :-) I need the space and the cash!
Posted by Jason at 7:42 pm 1 comment:

Standard Atlas moves under it's own power

Yes it moves, with both forward and backward motion, maybe even a little braking in between. This is the better of the two Atli vans Dave has, the camper is, shall we say, more challenged than this one. I think this may well be the RBRR steed - we must be mentalists.

Here's a pic I like too, one man at peace in his van 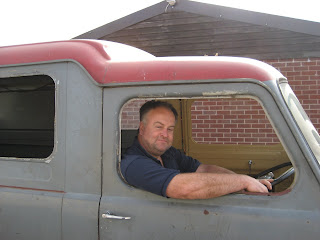 I'm just off to Penzance for a few days to see some friends then I'm back for a week and a bit of DIY jobs around the house plus, I hop, some work on the PI.
You see whilst sat in hotel rooms with nothing but eBay for company has seen me hoovering up some Mk1 stuff. The car really wants very little but there are a few things that bug me and, as is the case when you have time on your hands, those little things have become big in my mind. Enter eBay - to replace a slightly cracked indicator lense I've managed to find a whole sidelight and indicator unit, NOS. In doing so I also found a NOS rear that was too cheap to pass. Although my choke cable buying has reached OCD levels I've never quite managed to get exactly the right knob - well I have now :-) a NOS cable with correct detachable knob is mine - but they are a bitch to fit onto the metering unit - I think I'm just gonna bite the bullet and pull the metering unit this time, far easier!
I need to refit the PI steering wheel and boss and then attend to all the other jobs that remain on the list. That's a list that hasn't changed much since I made it when I got back from the Isle of Wight in May!!
There is a box in the garage of all the parts to go on the car and it's growing and growing - time to get my finger out.
Also, some RBRR admin needs doing, I've been organised this year and booked my cheapo train ticket to Coventry so I can get up to Dave's and start the run in the traditional manner, later night beer and curry on Thursday ready to rebuild and MOT whatever vehicle we're using. I think the Atlas camper isn't going to see the RBRR this year, the Atlas van on the other hand is pretty close to an MOT! It runs under it's own power, just. When I can figure out how to do it I will post up a video of Dave doing what he does best, poncing about wasting time with me encouraging him :-)
As for RBRR rides, it's not decided yet - might be the Courier, might be something else - at the moment my entry list says Atlas, Tim's says Courier and Dave says "Something else".......
Posted by Jason at 8:01 am No comments: