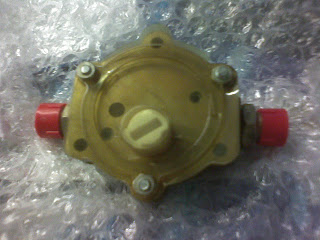 I don't usually get too excited about new old stock but just recently I've had a couple of bits of luck with NOS. The most recent is this - it's a brand new Lucas PI pump body. It comes with clean inlet and outlet, nice unmolested strainer inside and a new plastic drive dog all held together with a little plastic cover. Cost - £22.50 :-)

I've been chatting to Gareth Thomas about rich running and what can be done, it's obvious that he really knows his PI theory and just recently I've heard some reports of the excellent results he's had sorting out people's PI woes. So I thought, let's see how good he is, we've chatted for ages and suffice to say I have a modified metering unit on the way. We hope it'll arrive in time to fit before next Friday's trip to the Isle of Wight camping weekend, fingers crossed. We'll set up some time in May to tune the car and see if we can make the best of these new bits.

Also in today's news, the Sixfire was woken from slumber and taken to the MOT tester, passed without drama although I can see that it does need a set of front disks, the present set are quite pitted at the edge and warranted an "advisory" on the ticket - I'll get a pair next time I'm in Canley Classics.
Posted by Jason at 3:12 pm No comments:

I stopped off at Canley classics yesterday, on my way to Newcastle for work. I found Dave walking around like an old man who's just soiled his trousers! Yup, Pearson has done his back in, it wasn't a pretty sight. The poor old crumbly was hobling around like some sort of slow motion Teurett's sufferer, yelling some choice phrases as an invisible nurse wiggled red hot needles in his back. I did what any friend would and took the piss, then bought him a beer which seemed to help.

Poor old codger, too many years juggling engine blocks. I'm going back tomorrow so I'll drop in and see how he's doing. If you're waiting for bits from Dave, be patient.

It seems the season for injury, a couple of Triumph pilots have had accidents recently, only one in a Triumph but both have involved serious injuries.

Be careful out there people!
Posted by Jason at 4:30 pm No comments:

Tinkering and getting my top off

Played with the timing agian and returned the electronic ignition, also fitted one of Bill Davies' beautiful rotor arms, so much better that the other repro crap we've all been cursed with. We'll see how it fairs - I carry several spares! I also mixed up some epoxy and set the old repro rotor arms in tight to see if they can be improved - I'm just playing really.
I also pulled he hard top off and strung it up in the garage roof -summer's here :-) I bet it pisses down tomorrow!
I tried to take a vacuum reading at idle but couldn't get anything sensible out of my cheapo vac gauage - granted I didn't have any proper vac tubing to connect it but it should have worked - the vac reading was all over the place but looked to be about 5 inches of mercury. That seems awful low. I've been chatting to Gareth Thomas about metering units and fuel curves as I just can't seem to get mine to run any leaner - it's waaaaay too rich at the moment and apart from drinking like a whale it will begin to soot the plugs soon.
He's going to sort me out a matched metering unit with new seals etc. I'll fit it up and then arrange to get the car tuned - we'll see whether we can get it running how it should be.
That was about it for Triumph playing today, I was dragged out to buy bathroom fittings earlier and have other DIY duties to attend to tomorrow :-(
Posted by Jason at 7:50 pm No comments:

I noticed that Dave Sideways blog was missing from the CT homepage The Dave Sideways Spitfire Tuning Blog "The Crazy Spitfire" Dave's not renewed his CT membership as he's trapped in his workshop porting a K series - as soon as he's able to reassemble his Spit I'm sure he'll use it to break out!! Dave's project is getting interesting and it would be a shame to lose sight of his bloggings - I know it's not a Triumph engine but what the hell! I've been working far too hard these last few weeks, hours on the road between Reading Newcastle and Norwich then a eek off doing DIY (I never even ventured into the garage to see the Vitesse) Claudia has done more Triumph motoring than I have lately.

I was disappointed to see the Club Triumph forum fall over this morning, I hope Keith can get it kick started again for the weekend.
Posted by Jason at 3:25 pm No comments:

The bitch is back!

Just took the Vitesse down for an MOT, same place as I go every year. Had a few minor panicks this morning doing my pre-MOT checks. First the windscreen washer didn't wash, the little ballbearing non-returns was gunged up again so I sorted that. Then I noticed that the wiper blade on the passenger side had a small split in the end so I robbed one of Claudia's car, as I was doing it I thought "I did this last year!" so yes, I still need a new blade! The one of the rear sidelights was out - lends off and a quick wiggle fixed it, I threw the scredriver in the boot just in case it needed attention at the test, it did!
Off we went, tester was the other guy, there are two chatty amiable old guys and a not so chatty young guy at this place. I think of them as Stator and Waldorf the guys on the muppets! Anyway, everything OK but he was confused by the headlights - apparently they dip in the wrong direction! Now these are the same headlight lenses as have always been on the car - they aren't original as the car has halogens. I have changed the bulbs since the last MOT and I thought it may be that those weird H4 bulbs are prefocussed but they can't be, can they? Anyway, the tester said "Just put some tape on them and I'll test them again" so I did and they passed :-) Looking back at my research I think it must be the lenses. Oh well, something else to add to the list - I wonder if I can get some less obvious beam deflectors?
The tester found a little play in the steering rack - I'm not sure it's where he says it is but as it's just an "advise" I'll take a look another time. I have a pair of track rod ends "in stock" so I may change those to see if that cures it - to be honest I can't feel any play.
Oh and it was "only" £40, I had thought that the fee was now £50. He also said that for lights there was a free retest which was handy as technically the issues with the lights were both fails!
I've been going there for several years now with a few different Triumphs and I'll carry on using Sun Garage in Woolhampton on the A4 next to the Sun pub, you really can't miss it!
Posted by Jason at 11:35 am No comments: