Last night I dropped in at the Plough in Enfield for the local Club Triumph meeting - following a 5:30 start I had been in Norwich all day and left there about 17:30 - I stopped off at the Plough and met with some familiar faces - Tim Bancroft, James Carruthers, Ellis Stokes, Nigel Gair and loads more - good to have a chat and a bit to eat together. I'll put these meetings in my diary and, as I'm often in Norwich on a Monday, I will try and do it again.
If I'm not passing then it might be a laugh to take teh Vitesse out and take a drive over - the traffic at that time sucks though and I would prefer not to spend ny leaisure time sat on the M25 clockwise when I sit on the M25 anti-clockwise with my job so often :-)
Posted by Jason at 3:42 pm No comments: 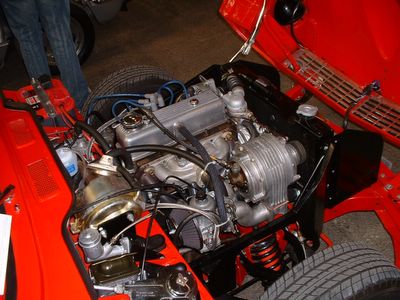 Scroll down for more photos from Stafford and a few words.
Posted by Jason at 9:24 pm No comments:

The W.I.T - Women In Triumphs at Stafford. 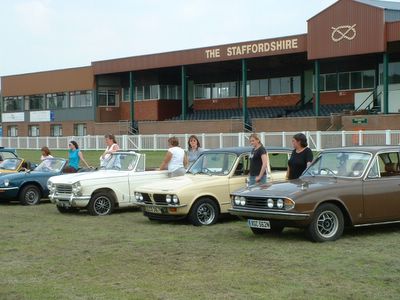 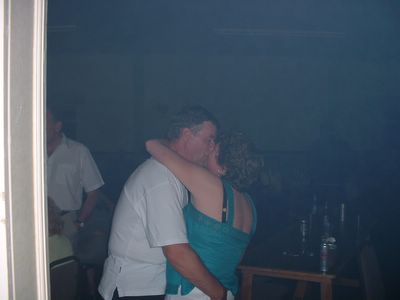 There's far too much of this sort of thing going on, I mean, she should get her own chewing gum.
Posted by Jason at 9:15 pm No comments: 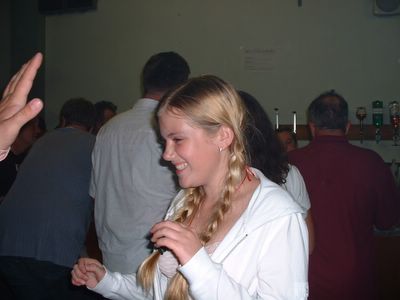 Stafford in the sunshine 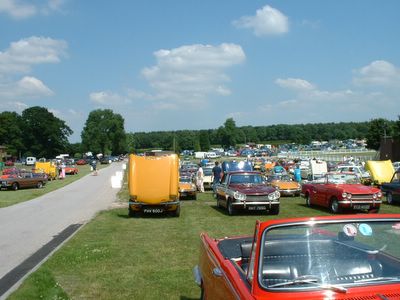 Lots of cars parked up on the field - we went and rounded up some of them from the camping site on Saturday
Posted by Jason at 9:13 pm No comments:

Who farted? We all know it was Carl 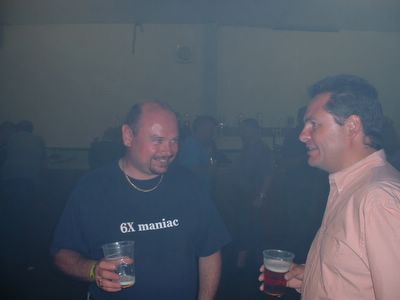 Andy on the left and Carl on the right - looking drunk and disorientated in the smoke - I think that was from Carl's backside.
Posted by Jason at 9:12 pm No comments:

The pick of the crop 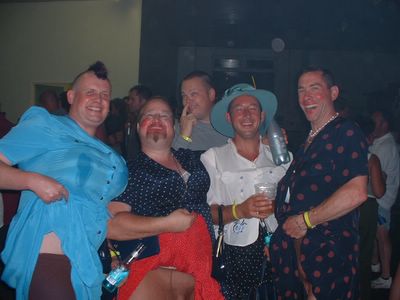 The ladies of Stafford, funny lot - and who's that bloke in the background picking his noise? :-)
Posted by Jason at 9:09 pm No comments: 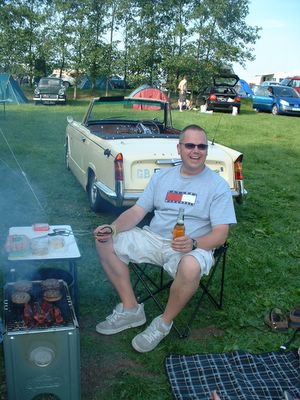 Enjoying a beer, a BBQ and a Triumph - I think the smile on my face says it all!
Posted by Jason at 9:08 pm No comments:

Just got back from a weekend away, camping in a field full of petrol heads.
Me and the guys from Hants & Berks did our thing - Andy Cook & Family, Mike Crewes & Claudia, Carl & Becky and Zoe and I made our way up separately but all converged on Friday night for a beer or two in the bar. It was great to catch up with old friends and put some more faces to names. The internet is a great place to correspond with people but it's quite weird to have some "stranger" come up to you and know you by name, by car etc.
Saturday breakfast was the usual Hants & Berks super full English - BBQ toast, bacon, sausage, Becky on the eggs and Carl on the beans - we'll feed anyone.
Becky's car was in for a hood fitting demo by Anglian Triumphs and Carl was so impressed he entered the Spit for the Cruised and Used concours, no prize but an interesting experience none the less.
We did our "official duty" and went round the campers asking people to park their cars on the field with the other visitors' cars - a good opportunity to chat to people too.
After that a quick trip round the hall, Carl stopping and buying from almost every trader - parts for the Sprint to make sure it's in tip top order for the trip round Europe, we even sorted out the Insurance with Footman James. Carl managed to save a tidy sum by putting all his and Becky's cars together on one combined policy including their modern car.
I picked up some wheel locks for our cars from Midland Wheel Supplies who were out in the sunlight on the autojumble stands - the jumble was quite good again this year. I noticed quite a few new components out there amongst the oily bits - some low key operations selling some rather tasty stuff!
Saturday night's band were very good, the ale flowed well and we drink them dry again. Not so many fancy dress revellers this year but enough to maintain the strangeness of it all.
We crawled into bed at some unmentionable hour and awake in red hot tents in the morning - this thing with camping is that when the sun shines on your tent, you don't want to be in it! Despite a thick head and too little sleep we were up and about. Carl & Becky needed to go polish the Spit and we sorted breakfast.
Sunday was a bit of a zombie day but nonetheless enjoyable. More catching up with people, a quick ride in the Picton Sports Cars Green monster - 2.5PI powered Spit, no seatbelts, no windscreen, no silencers - niiice. Piloted by James Caruthers who was up for the day to do the Official Photographer bit. - see photo 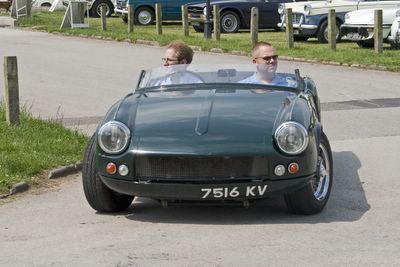 The WIT, Women in Triumphs, had their first outing, born on the spur of the moment this was a parade of ladies in their cars around the main arena. It went down rather well and I think we'll see it again.
After that it was wind down time, pack up and tidy up for the drive home. A masterful piece of navigating saw me avoid the Silverstone traffic and get home in pretty short order - hood down all the way. OK it was a bit of luck and a fortuitous error but I think it was good navigating - no satnav and my daughter asleep so who would know if I went wrong?
I'd like to attend a few more general classic shows this summer but with weekends away, school trips, another reorganisation at work (sigh), a near 3 week holiday to Cyprus and the 10 Countries Run to fit in, I may just have to accept that I can't do everything!

After my worries about the head gasket I have to say that the Vitessewentt well,coveringg in the 150 miles up there without drama and again the return journey was fine too - she never missed a beat and the oil stayed where it should, a little bit of a blow out of the oil filler vent which is annoying but nothing like the previous outings. I improved the breathers and I think I'll go for a larger bore breather system into abiggerr catch tank eventually.
Posted by Jason at 8:36 pm No comments:

I see you baby, shaking that ass!

The Sixfire suspension and handling has always needed tuning ever since we got the car. She sits too high at all round but especially at the back, this leads to a touch of positive camber, never good. The front is too soft, I suspect it's got Spitfire springs on. The shocks aren't aweful but they aren't great either.
If I were driving it more often I'd have invested in 330 lb front springs and a thicker anti-roll bar with either a lowering block on the back or a replacement spring from a trusted source (www.canleyclassics.com) to get it sitting right. At the moment it's all too easy to induce rear breakway.
However, as this is Claudia's car I've left it up to her and she's been quite pleased with the soft ride and hasn't taken it near it's limits (it doesn't take much to get there!). Until now that is!
She was out in the rain in the week with a friend in the car, probably gossiping and not paying too much attention to anything. The road was wash and she says she just entered a roundabout at a modest speed, as she came around she felt the rear break away and start to slide, she caught it and apart from some extra laundry, no harm was done.
Of course the first thing I was question on when I got home was suspension improvements.
I'll get onto it now boss!
Posted by Jason at 1:19 pm No comments: